In June 2014, the U.S. Agency for International Development awarded FHI 360 the Linkages across the Continuum of HIV Services for Key Populations Affected by HIV (LINKAGES) project, a global cooperative agreement funded by the U.S. President's Emergency Plan for AIDS Relief. FHI 360 partners with Pact, IntraHealth International and the University of North Carolina at Chapel Hill to conduct a range of activities to reduce HIV transmission among key populations — sex workers, men who have sex with men, transgender persons and people who inject drugs — and to improve their enrollment and retention in care.

Under LINKAGES, the FHI 360-led team accelerates the ability of governments, organizations working with key populations at risk of HIV and private-sector providers to plan and implement services that reduce HIV transmission among key populations and their sexual partners and extend the lives of those already living with HIV.

Project activities enhance the HIV prevention and care cascade by increasing reach to key populations most at risk of acquiring or transmitting HIV, promoting routine HIV testing and counseling, and actively enrolling those with HIV into care and support interventions that enable them to remain in care. The project helps countries use and scale up evidence-based approaches to service provision; help key populations mobilize and advocate for changes in laws and the conduct of police, health care workers and policymakers; and work with governments to make programs sustainable for the long term.

What LINKAGES means for key populations 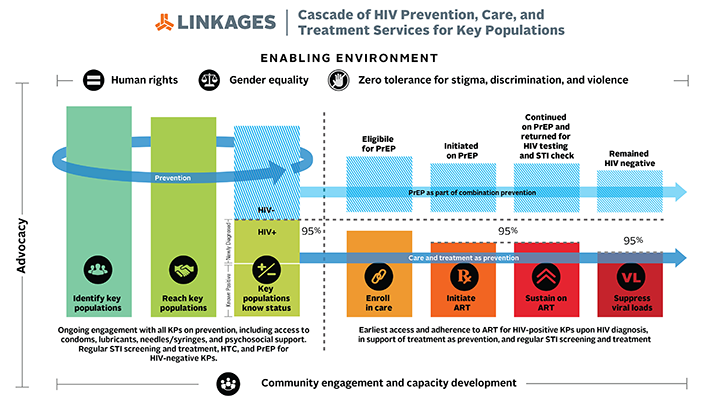 The Power of Key-Population-Led HIV Programming