Private drug shops – local shops that are often the closest health care facility for women in Uganda – can now offer injectable contraception in some locations. This is a significant win for women, especially in rural areas where access to health facilities is limited. 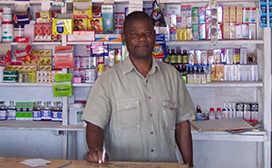 Almost ten years ago, FHI 360 began the work that ultimately led to policy change. The National Drug Authority in Uganda now allows licensed and accredited private drug shops to stock and administer injectable contraception in 20 districts. This policy shift was the result of years of working with the Ministry of Health on research, stakeholder engagement and advocacy. FHI 360 and its partners conducted the efforts through the Advancing Partners and Communities (APC) and the Program Research for Strengthening Services (PROGRESS) projects, both supported by the U.S. Agency for International Development.

FHI 360 began the process with a 2007 survey that assessed the suitability of drug shops to sell injectable contraception. The results showed that most of the workers in drug shops were women and had some medical training and that drug shops were already a major provider of health care. The results also found that training would be needed on providing general family planning information and on injection skills and protocols.

The survey led to a 2009 pilot study in which FHI 360 looked at whether workers in drug shops could provide depot medroxyprogesterone acetate (DMPA). FHI 360 and Save the Children provided training on family planning, safe injection and waste disposal procedures.

Two years later, FHI 360 did a follow-up survey to assess the knowledge, attitudes and practices of drug shop workers who were trained to provide DMPA. Researchers found that with worker training, drug shops are a safe and feasible way to provide family planning products and services. These results also showed that drug shops were a preferred source for family planning services, as almost half of family planning clients switched from clinics to drug shops for services.

In 2015, the Ministry of Health and FHI 360 presented the evidence from the surveys and pilot study to leaders in government, nongovernmental organizations, academic institutions and civil society organizations. A ministry-approved task force led by FHI 360 wrote the Justification Paper for the Provision of Injectable Contraception by Drug Shop Operators in Uganda.

In November 2016, the task force submitted the justification paper to the National Drug Authority, which accepted the findings and changed the policy in July 2017 to allow licensed and accredited drug shops to stock and administer injectable contraception in 20 districts.