In Senegal, where 30 percent of rural households experience food insecurity, fish are a critical source of nutrition, and the fisheries industry provides jobs for more than 600,000 people. Artisanal fishermen catch 90 percent of the fish and sell to wholesale fish markets and small-scale fish processors, who are predominantly women. The industry’s overall economic growth, however, has been hampered by a lack of access to timely wholesale prices, scant knowledge of improved processing techniques, limited financial services, exposure to health risks and poor hygiene at processing sites. 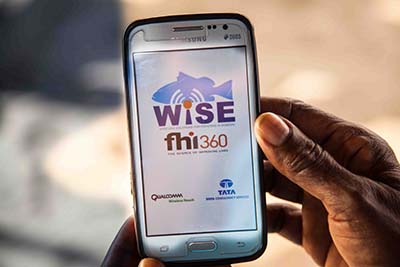 But, an innovative mobile application developed by the Wireless Solutions for Fisheries in Senegal (WISE) project is changing the economic outlook for thousands. A collaboration among FHI 360, Qualcomm® Wireless Reach™, the Senegalese Food Security Commission and Free Senegal, the WISE project enhances the competitive advantage of artisanal fishermen and fish processors.

WISE also partners with local microlending institutions to make affordable loans available to fishermen and fish processors who want to grow their businesses.

The app is available in English, French and Swahili, and is compatible for 3G/4G-enabled Android smartphones with GPS capability. Based on user feedback, the WISE team recently added an artificial intelligence (AI) feature to make the app easier to use. Now, fishermen and fish processors can speak to the app via a “chatbot” and ask questions about the app’s features. The AI chatbot can even understand slang and local terms.

Since its launch in 2014, WISE has been deployed in Senegal’s four major fish landing and processing sites: Dakar, Joal, Mballing and Mbour. Services, however, are available free of charge to anyone with access to smartphones and the internet. The project has also supported more than 200 low-income economic interest groups, serving more than 5,200 fishermen and fish processors by providing smartphones and internet access to enable them use WISE services.

Demand for the WISE platform is growing as word spreads. The community radio station in Joal has started to broadcast information, such as market prices, from WISE to the broader community. And Free Senegal, one of Senegal’s leading mobile phone providers, will soon launch a program providing smartphones at reduced rates to additional people in the industry.

The national government has taken notice of WISE’s impact. Senegal's Ministry of Digital Economy and Telecommunications, which guides digital interventions to spur economic growth, is making plans to expand WISE nationwide. The ministry will hold a conference in early 2020 to discuss scale-up pathways.