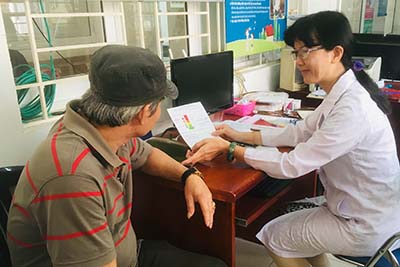 In Vietnam, community engagement and empowerment are proving to be powerful strategies for controlling noncommunicable diseases (NCDs), such as hypertension and diabetes. NCDs cause more than 500,000 deaths each year in Vietnam. A 2015 Ministry of Health report on NCDs estimated 20 percent of adults live with hypertension and 4 percent with diabetes.

To combat both diseases, FHI 360’s Abundant Health project partnered with the Ho Chi Minh City Department of Health, the University of Medicine and Pharmacy of Ho Chi Minh City and the Harvard Medical School Center for Primary Care. With funding from the Pfizer Foundation,* FHI 360 and its partners work closely with neighborhood leaders in Ho Chi Minh City to raise awareness about the risk factors for these diseases and to increase the proportion of eligible patients who are screened and treated at the commune health stations or government-run primary health care clinics.

This community-driven approach has not only increased the number of people screened for hypertension and diabetes, but it has also boosted treatment rates for both NCDs. In 2016, the 11-month pilot began in five Ho Chi Minh City communes. By August 2019, it had scaled to all of the city’s districts. During the pilot, the project team reported that the number of people screened for hypertension increased from 3,472 to 8,075 and for diabetes from 336 to 6,989. Since September 2018, there has been a further increase in the number of both hypertension and diabetes patients — from 3,580 to 6,474 total — treated at 110 health stations across the city.

Tapping into the knowledge that community leaders and health staff have of local people and culture, FHI 360 collaborated with them to develop tailored content for training health station staff and to establish improvement goals for each station. Abundant Health regularly brings together staff from different health stations to reinforce training through the sharing of successes and failures and problem-solving.

As a result, health staff have changed their approach to NCDs. Increasingly, they place the patient at the center of their care, help individuals to modify their lifestyles and elevate only complicated cases to a district health center. This approach enhances the patient experience and aligns with national efforts to decentralize and modernize primary health care.

“Abundant Health is different from other projects. The community-driven model has helped identify hidden issues and equipped health staff with the ‘hook’ rather than just giving them ‘fish.’ When the project ends, they will still have the skills and experience to maintain project gains,” said Dr. Nguyen Huu Hung, Vice Director of the Ho Chi Minh City Department of Health.

*The Pfizer Foundation is a charitable organization established by Pfizer Inc. It is a separate legal entity from Pfizer Inc. with distinct legal restrictions.