In El Salvador, a lack of quality education and insufficient academic support have contributed to an increasing number of dropouts among lower secondary students (grades 7–9).

The country is plagued by one of the highest homicide rates in the world. This factor, when coupled with poverty, adds to the challenges the country’s youth face in order to succeed in school.

As part of the U.S. Agency for International Development’s Education for Children and Youth Program, FHI 360 has worked to transform mindsets to view youth in a positive way and support youth success in Salvadoran schools. The organization has done so by introducing local educators and stakeholders to positive youth development, a philosophy and approach that seeks to strengthen adolescents’ social, emotional, behavioral, cognitive and moral competencies, including many “soft skills.” 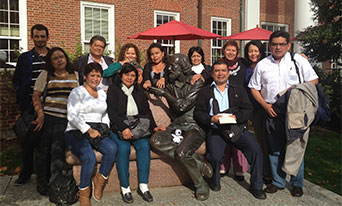 For both activities, FHI 360 incorporated the Search Institute’s 40 Developmental Assets for Adolescents, a research-based framework that identifies the assets — external supports and internal characteristics — that young people need to succeed in school and life.

From January to November 2015, FHI 360’s Developmental Assets and Student Success Pilot Program worked with eight Salvadoran schools serving more than 1,000 students in grades 7–9 to integrate a positive youth development approach into existing school structures, systems and programs. Teams from each school used the 40 Developmental Assets for Adolescents framework to identify assets, such as family support and positive peer influence, that youth lacked and then created goals and action plans to help students strengthen those assets. The schools made strategic changes to improve external supports for youth — such as deepening parent and community engagement — while building internal social-emotional competencies through actions such as creating leadership opportunities for students to plan and facilitate workshops for parents on adolescent development topics. The focus on developing student strengths allowed school staff to build closer relationships with students, identify students who needed additional help and create supportive environments to keep students in school.

In November 2015, FHI 360 hosted a study tour in Washington, DC — the fourth in a series of Education for Children and Youth Program tours focused on creating safe and supportive learning environments — for a group of 12 Salvadoran school principals, Ministry of Education officials and local partners. Participants visited schools, community organizations and government agencies to explore transferable strategies that successfully support the positive development of secondary students.

For example, at International High School at Langley Park in Prince George’s County, Maryland, participants learned how teachers support the development of the internal assets of immigrant students by dedicating weekly meetings to analyzing and discussing their specific social-emotional needs. At the Crossroads Youth Opportunity Center in Montgomery County, Maryland, participants spoke with ex-gang members, who emphasized the importance of parental and community support in keeping students in school.

Participants were struck by the student-centered focus of the programs and were inspired by the enthusiasm and commitment of the educators and community workers with whom they met.

Both the pilot program and the study tour assisted Salvadoran educators and stakeholders to develop a common language and strategies to encourage positive youth development, which contributed to changing their view of youth from problems to be solved to resources to be nurtured.

As these leaders share the positive youth development approach and the lessons learned from their experiences with other schools and colleagues in El Salvador, they will take an important step toward ensuring the academic and personal success of Salvadoran youth for years to come.

Learn more about the Education for Children and Youth Program.