On May 8, 2018, the Democratic Republic of the Congo (DRC)’s Ministry of Health declared an Ebola virus disease outbreak in Equateur Province in the country’s northwest region — the ninth outbreak in DRC over the last four decades. 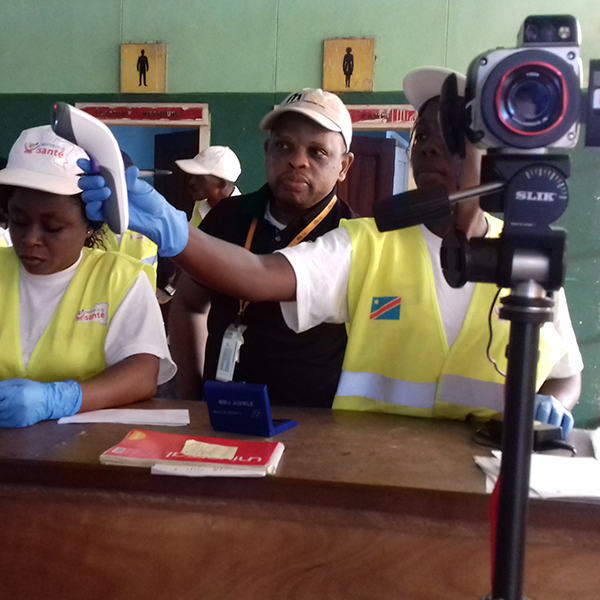 The international response to this Ebola outbreak was swift and effective, and as a result, the outbreak was contained. FHI 360 contributed to the efficiency of the response by improving screening sites at the country’s critical points of entry through trainings on point-of-entry surveillance for health border control officials and epidemiologists.

The World Health Organization defines a point of entry as “international airports, sea ports and ground crossings.” The points of entry for DRC’s recent Ebola outbreak were along rivers connecting communities in the rural Equateur Province, where the outbreak originated, to major population centers, such as Mbandaka, the capital of Equateur province, and Kinshasa, the capital of DRC. The Congo River and its tributaries also connect to Bangui, the capital of the Central African Republic, and Brazzaville, the capital of the Republic of the Congo. These four cities have a combined population of more than 15 million people. A single unscreened carrier of the disease who entered a major population center via a river point of entry had the potential to spread the infection rapidly — and unpredictably — throughout DRC and beyond its national borders.

Just a few weeks after the world learned about this outbreak in DRC, FHI 360 deployed Dr. John Otshudiema — an epidemiologist trained by the U.S. Centers for Disease Control (CDC) and a Health Technical Advisor for FHI 360’s crisis response team — to address problems at DRC’s points of entry. Much of Dr. Otshudiema’s career has been spent implementing infectious disease screening systems across West Africa. After spending three weeks overseeing the screening sites around Mbandaka, Dr. Otshudiema learned three lessons that he believes should inform future Ebola interventions globally.

​​A detailed analysis of the geography of Equateur Province and its river systems informed the selection of point-of-entry screening sites in Bangui, Brazzaville, Kinshasa and Mbandaka. Because the outbreak originated in rural areas, and rural populations in Equateur Province frequently travel to cities to bring supplies back to their families, a thoughtful geographic analysis of popular travel routes was important in determining where screening sites were established. By setting up screening sites at the points of entry to these cities, as well as points of entry within Equateur Province that lead out to them, responders were well-positioned to manage cases before they reached urban areas. As of June 27, 2018, a total of 128,649 travelers were screened at 91 sites in the region, with a total of 57 Ebola cases reported.

The DRC has a strong network of Ebola responders, who gained experience from the country’s previous outbreaks. The region of West Africa also has a solid network of epidemiologists and vaccinators who can be deployed to DRC at the very early stages of an outbreak. The response to this outbreak was successful due to the collaboration and rapid mobilization among Ebola responders, many of whom developed relationships during the 2014 outbreak in West Africa. It is critical to set up similar regional cadres in other areas of the world vulnerable to outbreaks. These cadres should include experts on point-of-entry who have been trained to analyze the geography of an outbreak zone and determine where screening sites should be established.

Infectious disease responses in the past have typically been dictated and implemented by the World Health Organization and its international partners. However, the DRC’s Ministry of Health facilitated the development and coordination of the strategic plan for this response, with support from the World Health Organization. Without the Ministry’s leadership, information-sharing and in-depth knowledge of the geographic and epidemiological factors of the outbreak, it would have been much more difficult to respond. This nationally driven leadership model should be considered the norm for future outbreaks.

Every country presents unique geographic, political and cultural challenges to implementing a strategy to contain Ebola. The lessons learned from FHI 360’s most recent response should inform the strategic design of screening procedures in future Ebola responses with similar characteristics. The rapid geographic analysis and setup of point-of-entry screening sites play a key role in stopping an outbreak at the source, no matter where the source may be.

Photo caption: An Ebola screening site at the Mbandaka Airport.