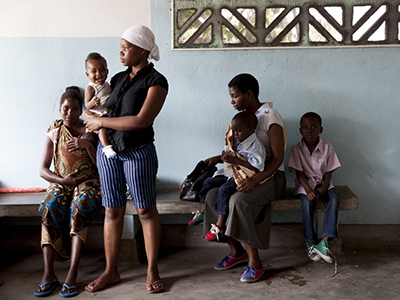 When twin cyclones struck Mozambique in March and April 2019, the destruction was unprecedented in the small, southern African nation. About 1.85 million people were affected and in need of assistance, including 146,000 internally displaced people. Rural areas were hit the hardest, with entire villages reduced to rubble. Many health facilities were nearly destroyed, leaving residents even more vulnerable to the rapidly increasing threats of cholera, malaria and other diseases.

When the cyclones hit, FHI 360 quickly mobilized teams on the ground to assist in disaster response.

FHI 360 has been working in Mozambique since the early 2000s, when we first led the implementation of a project to prevent HIV transmission from mother to child. Over the following years, projects have expanded to include training clinicians in the care and treatment of HIV and AIDS, tuberculosis (TB), malaria and undernutrition. We have also worked to strengthen government and local institutions and protect the environment.

"Because we've been working in Mozambique, we were well-positioned to help immediately," said Celeste Riendeau, a program manager with FHI 360. "The benefit of already being there meant that we were one of the first organizations able to offer assistance."

One of the greatest risks in the aftermath of the disasters was the spike in cases of cholera, primarily affecting rural areas. With health facilities devastated or destroyed, addressing urgent health risks required creative thinking.

Working with the Ministry of Health, the National Institute of Disaster Management, the provincial health departments of Sofala and Cabo Delgado and other aid organizations, we identified sixteen health facilities that were the most heavily impacted and began restoring them.

“When the first storm hit, health care centers in some areas lost their roofs, and the rain that continued for days corroded medical equipment, destroyed supplies, and overwhelmed the washrooms. Health facilities were also inaccessible due to debris, broken glass, and their remote nature that was made worse by roads and bridges being washed away.”

“When the cyclone came, our entire health facility was destroyed, and we had to do treatment in tents and under tree shadows,” said Dr. Anastácio Cardoso, Clinical Director from the Mutua Health Facility in Sofala. “With support, we were able to start giving consultations with dignity to people of the area. The health facility is even better than before.”

Within six months, the sixteen facilities were fully operational to meet the most urgent and critical needs. But, there is still more work to do. Many of the facilities need accommodations for staff to mitigate critical staffing shortages in rural areas, new waiting areas for pregnant women who must travel a distance to deliver their babies, rehabilitated water systems, health care waste management zones, new latrines and septic tanks, and fencing.

More and more, vulnerable areas expect to feel the impacts of natural disasters, from weather events to earthquakes and more. Many of these areas are places where FHI 360 already has an established presence and a long history of collaboration with local government officials, other nongovernmental organizations and health care workers. These relationships mean FHI 360 is ideally suited to help in the event of a disaster. “This was our first time responding to a natural disaster,” said Riendeau, “but with the experience we had in-country, we knew we had to help.”