A study in Madhya Pradesh, India, aims to keep girls in school

In the state of Madhya Pradesh, India, a multidistrict study is under way to better understand the key causes or barriers to secondary schooling, especially for socially disadvantaged girls. The U.K. Department for International Development (DFID) has commissioned FHI 360 to conduct the study, which will not only look at the factors that keep girls from accessing and completing secondary education, but will also determine an optimal package of incentives, both financial and nonfinancial, that will improve girls’ access to secondary schools and prevent them from dropping out. 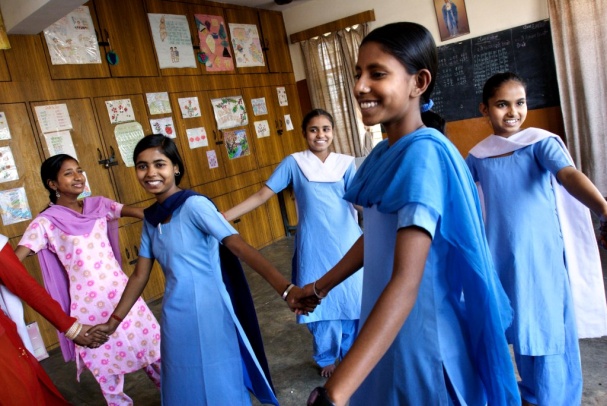 During the past two decades, the Government of Madhya Pradesh has implemented several programs to increase access to education. The state has close to 66,000 schools, a majority of which are primary schools, with more than 15 million students enrolled in grades 1 to 8 and more than 1 million students in grades 9 to 11 in 2011–2012). As a result of the Government’s efforts, the gross enrollment ratio at the secondary level (the percentage of eligible students actually attending secondary school) in Madhya Pradesh is currently reported at 72.41, as compared to the national average of 60.

Despite this progress, the second most populous state in India continues to face significant challenges delivering full social and educational services to all citizens. Poverty is widespread throughout the state, and a significant percentage of the population qualifies to receive social services from the Government. Many students never complete their primary schooling, while enrollment rates are low in secondary schools among certain groups. This is particularly common among girls, who tend to drop out in greater numbers from upper levels of primary school, and among girls and boys belonging to scheduled castes and tribes. Persistence of social exclusion practices, poverty and child marriage are some of the significant barriers that keep girls from enrolling and staying in school.

The multidistrict cross-sectional research study uses both qualitative and quantitative methods of data collection. The qualitative data is being collected through focus group discussions with parents and girls — both in school and out of school — to broadly understand and rank barriers to girls’ secondary education, to assess gender norms related to girls’ and boys’ education and to determine the perceived optimal package of incentives (financial and nonfinancial) that could potentially improve school enrollment, attendance and retention rates of girls. The ranking of barriers from the qualitative study will feed into a cross-sectional quantitative household survey with a sample of 750 households from rural and urban poor subpopulations. The quantitative household survey will validate the barriers and, more importantly, will help to determine the perceived value of the optimal package of incentives that hopes to enroll and retain girls in secondary schools.

The recommendations from the study will aid the Government of Madhya Pradesh in furthering the progress that it has already initiated to increase primary and secondary school enrollment and retention rates.