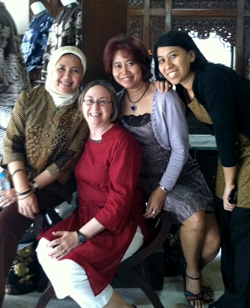 Greetings to all! I recently had the opportunity to work with colleagues from FHI 360 and the National Tuberculosis Program (NTP) and National AIDS Program (NAP) in Indonesia. FHI 360 is a collaborating partner for USAID-sponsored work in Indonesia under the project called TB CARE I. We work with the Dutch organization KNCV, the World Health Organization and others to focus on integrating tuberculosis (TB) and HIV/AIDS activities and to improve access to TB care and treatment within prisons across that large and complex country.

Why are we at FHI 360 so focused on TB and HIV/AIDS integration? For a number of years, we have been working with governments to build stronger HIV/AIDS programs around the globe. What we and others have learned is that the number-one killer of people living with HIV/AIDS is TB. There is a very close, causal link between TB and HIV/AIDS. HIV/AIDS makes it many times more likely that a person will get sick with or die from TB. In addition, TB makes the HIV/AIDS virus replicate even more quickly, leading to further immune suppression and AIDS-related illness and death. Recent published research has shown that life-saving interventions include rapid initiation of TB treatment after diagnosis and rapid initiation of antiretroviral therapy (ART) after TB treatment gets started. Furthermore, isoniazid preventive treatment (IPT) can save lives by keeping people with HIV/AIDS from getting TB. An even more powerful approach for individuals already infected with the HIV virus is to get them started on ART before their immune systems become too weak.

In addition to my key objective of reviewing our TB and HIV/AIDS integration activities and the prison program, I served as a plenary speaker at the Indonesia Infectious Diseases Update Symposium in Malang, Indonesia. I also provided lectures and on-site consultation for members of the NTP, NAP and FHI 360 staff, focusing on multi-drug resistant TB, TB-HIV/AIDS and IPT. Our discussions showed how challenging it is to implement good programs with limited resources.

Other TB-related issues are also critical to solve. These include improving universal access to high-quality TB diagnosis and treatment, preventing spread of disease from one person to the next — especially within hospitals and clinics — and identifying and preventing disease among young children, who are at high risk for severe TB. USAID-TB CARE I provides funding to FHI 360 to work on these and related issues in Cambodia, Indonesia, Mozambique, Nigeria and Zambia.

In keeping with the theme for World TB Day 2012, “STOP TB in My Lifetime,” I want to see the epidemic of TB-HIV/AIDS become a distant memory. I am happy to report that my colleagues in Indonesia are working hard to make this come true.