Malnutrition among pregnant women and young children is a major public health concern in Bangladesh — 5.5 million children under 5 years of age are chronically malnourished. To improve the dietary practices of mothers and reduce undernutrition among children under 2 years of age, the SHIKHA project scaled up maternal nutrition and infant and young child feeding interventions in southern Bangladesh. 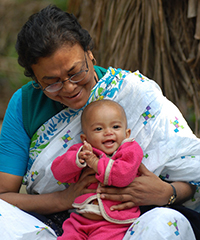 FHI 360 implemented this three-year, community-centered project in partnership with BRAC; the Centre for Injury Prevention and Research, Bangladesh; and Asiatic Marketing and Communication Limited. The project was funded by the U.S. Agency for International Development under the Feed the Future initiative. The name SHIKHA was inspired by the Bangla term, “shisukekhawano,” which means infant and young child feeding.

Home visits. SHIKHA established a home-visit schedule of five visits per pregnant woman and 12 visits per child under 2. Government frontline workers provided the mothers of the children with infant and young child feeding counseling, coaching, demonstrations, problem-solving lessons and referrals. Pregnant women also received counseling on the importance of a diverse diet as described on the Food Plate, a plastic plate with images of nutritious food types and proportions that was developed by the SHIKHA team and endorsed by the Bangladesh government for this project and other nutrition efforts.

By the end of the project, the SHIKHA team demonstrated that comprehensive behavior change communication is essential to improving nutrition outcomes and that infant and young child feeding interventions are feasible and can produce positive results. Going forward, local governments in Bangladesh will review data regularly and use the Food Plate model and the frontline workers training to continue progress beyond the project’s end.