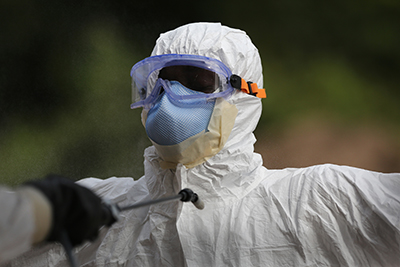 In the Democratic Republic of the Congo (DRC), violence and mistrust are potent factors in the spread of Ebola virus disease (EVD). One rumor in the district of Nyakasanza alleged that burial teams were harvesting human organs from the bodies of the deceased for illegal trade. To allay fears and dispel misunderstanding, FHI 360’s crisis response team brought together community members, including local leaders, village elders, health professionals and women, to engage in an open dialogue and understand the root causes of their concerns.

During the meeting, FHI 360’s team educated the community about Ebola symptoms, prevention methods, the importance of seeking health care and the role that safe burial practices can play in curbing the spread of the disease. Afterward, the community pledged their support for Ebola-related activities, including welcoming vaccination and psychosocial teams.

With funding from the Office of U.S. Foreign Disaster Assistance, FHI 360 is working to stop the spread of EVD in hard-hit communities in North Kivu and Ituri provinces, including Butembo, which the World Health Organization calls the epicenter of this outbreak. Given the more than 1,800 deaths in the DRC and several in neighboring Uganda, there is growing concern that EVD will reach additional provinces and countries if it is not contained.

FHI 360’s two-pronged EVD response entails engaging directly with communities to increase acceptance of prevention, surveillance and burial activities as well as training local teams to conduct safe and dignified burials with family and community consent. Safe and dignified burial practices are critical to preventing the spread of EVD, particularly to other family members. Since March 2019, FHI 360 has reached nearly 8,700 people through its community engagement activities.

Personal testimonial can be a powerful communication tool to increase understanding about EVD and the need for safe burials. In Butembo, FHI 360 collaborated with one EVD survivor, a man named Kasereka, and invited him to speak at community meetings. He explained the facts about the virus, including how it is transmitted, and shared his personal experience.

“Eleven out of 17 of my family members died from Ebola,” he said. “I am among six people of my family who survived. Since I was informed at an FHI 360 community engagement meeting, I have taken a decision to speak out about EVD resistance.” He urged his audience to support and accompany Ebola response teams and to accept safe burial practices. Several participants said his firsthand account helped them to believe the virus is real.

FHI 360 has trained four burial teams in Ariwara, Bunia, Butembo/Katwa, and Komanda, and those teams have completed 418 safe and dignified burials. Additional teams are being trained in new outbreak areas. All teams follow Ministry of Health and World Health Organization safe burial protocols, which include guidelines for communicating with family members, gaining their consent and respecting religious preferences. By engaging with communities and earning the trust of families, FHI 360 is helping to reduce the spread of EVD in the DRC.