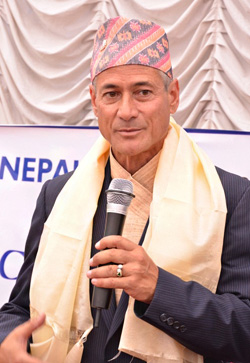 On Friday, October 12, Saath-Saath Project in Nepal hosted renowned HIV-rights advocate and Olympic multi-gold medalist Greg Louganis. A model "HIV-free village" was set up with an interactive tour that demonstrated how the project is supporting the national drive to eradicate HIV in the country. Funded by the U.S. Agency for International Development (USAID), the project is being implemented by FHI 360 in partnership with the Government of Nepal in 33 districts across the country through more than 40 local nongovernmental organizations.

Saath-Saath Project (which means "together" in Nepali) aims to reduce the spread of HIV and improve the reproductive health of Nepal's most-at-risk populations, including female sex workers and their clients, migrant workers and their spouses and people living with HIV. The five-year project is designed to decrease HIV prevalence, promote family planning services, build local capacity, increase the quality and use of HIV services, strengthen coordination among HIV partners and ensure safe medical waste management at clinics.