Beheshta,* a university student in Afghanistan, has an ambitious long-term goal: She wants to join the civil service and become either a minister or member of parliament. As an Afghan woman, achieving this goal will require her to overcome significant challenges, including the expectation that women marry and have children rather than pursue a career, as well as the realities of entering a workforce that is overwhelmingly male (only 15.8 percent of the workforce is women). Beheshta will also face pressures against participating in the wider community outside of her home. For example, she and her female friends often experience harassment when they go out in public for any reason, whether it is to go to the market or to school. 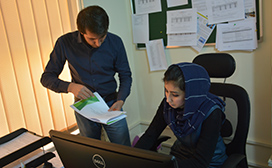 Beheshta is not letting these challenges stop her, however. In her last year of university, she began seeking employment. After an unsuccessful job interview, she quickly realized that she did not have the skills needed to secure employment. Her classmates encouraged her to take the soft skills training that is led by FHI 360 and supported by the U.S. Agency for International Development as part of the University Support and Workforce Development Program. This program is designed to enhance the skills and employability of Afghan women and men in the private and public sectors. To date, more than 3,000 students have completed extracurricular trainings supported by the program, and more than 450 students have participated in the internship program.

The training Beheshta received equipped her with valuable skills, such as how to apply and interview for jobs, follow the basics of workforce etiquette and build professional networks. Just as importantly, the training eliminated several potential barriers to her participation: It was held within the socially acceptable and secure boundaries of the university and took place after class. She did not have to miss classes or return to campus in the evenings, so there were no additional transportation costs or safety risks.

After completing the training, program staff arranged for Beheshta to interview for an internship with a local builders’ association. With new interview skills from the training, she was one of the first from her class to receive an internship offer. During the internship, Beheshta gained skills such as event planning, which she learned through organizing several conferences both inside and outside of Afghanistan. She also developed important connections that will help her as she seeks future employment. Getting used to the work environment was an adjustment for Beheshta, but the communications skills she learned in the training enabled her to become comfortable in interactions with her colleagues.

After completing her internship, the builders’ association offered her a full-time job as an administrative and membership assistant, and Beheshta accepted the position. But, beyond immediate employment, the next step on her journey is to earn a master’s degree in business administration and become an entrepreneur. Beheshta says that, through entrepreneurship, she “would like to empower destitute families to stand on their own two feet.” She hopes to develop projects that empower people to work their way out of poverty.

Although her short-term goals might seem like an unlikely route to public service, Beheshta must wait several years before she is eligible to join Afghanistan’s civil service. And, since Afghanistan does not have a civil service academy, it is common for ministers and members of parliament to come from different backgrounds, including the business world. Until she is eligible, Beheshta will continue to build a solid work ethic and pursue opportunities that give her transferable skills to help her succeed in civil service.