“I don’t have the words to thank Pamoja Tuwalee for making my dream come true,” says Omari about the Pamoja Tuwalee project in Tanzania. “Now I am an independent man supporting my family.”

In 2001, when Omari was 7 years old, both of his parents died of AIDS. He and his two brothers were left with nothing; all of the family resources were depleted during their parents’ illnesses, so they went to live with their grandfather. Lacking sufficient resources, Omari dropped out of school in the sixth grade to work as a farm laborer to provide for his brothers, grandfather and an uncle with an intellectual disability. The family depended on him for everything. Omari earned an average of 60,000 Tanzania shillings (US$32) per month planting and weeding on small farms. 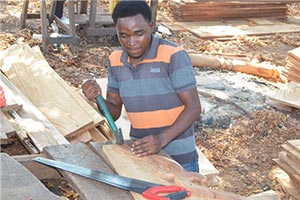 Omari and his younger brother enrolled in 2012 in the Pamoja Tuwalee project (which means “let’s bring up children together” in Kiswahili). The project is funded by the U.S. Agency for International Development. FHI 360 and project partners implement capacity-building activities to provide, manage and access care, support and protection for orphans and vulnerable children (OVC); mobilize and generate support for OVC through developing public–private partnerships; strengthen referral networks for HIV/AIDS and OVC services; improve the skills of caretakers; address gender-based violence and other gender issues; and build on children’s strengths to improve their self-esteem and coping skills and reduce self-stigma and the impact of discrimination.

Pamoja Tuwalee staff advised Omari on vocational training options and helped him to enroll in a six-month carpentry course. When Omari graduated in 2014, the project provided him with a start-up kit for his business. Omari is now 21 years old and living in the Pwani region of Tanzania. He is skilled at making beds, chairs, tables, cupboards, doors and windows tailored to his customers’ preferences and earns between TZS170,000 (US$89) and TZS200,000 (US$105) per month, which allows him to provide for his family’s needs. He has high hopes for growing his business.

Omari is personally committed to assisting two young people each year with on-the-job training and hopes over the years to help many youth from similar situations to achieve their dreams.

Read more about how the Pamoja Tuwalee project emphasizes capacity building and empowerment as strategies to enable integration, while providing guidance for project design and implementation.

Photo caption: Omari Mohamed Mchuchuli works at his carpentry business near his home in the Pwani region of Tanzania.