While there has been significant progress in closing the gender gap in science, technology, engineering and math (also known as STEM), women are still underrepresented in STEM education and careers. According to the U.S. Census Bureau, women make up 48 percent of the U.S. workforce but just 24 percent of STEM workers.

Scholars who study math education suggest that developing a positive math identity — the belief that you can do math and that you belong — is an important yet neglected driver of math participation, particularly for girls. There is often an incompatibility between the identities modeled in today’s math and science classrooms and the identities girls envision for themselves. 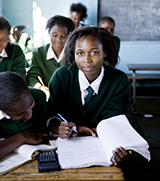 To address this problem, FHI 360 partnered with the New York Academy of Sciences on a capacity-building project that lays the groundwork for advancing research and practice relating to girls’ math identity. This project, which is funded by the National Science Foundation, has focused for the past three years on girls in grades four through eight. These are critical years when girls are transitioning from elementary to middle and high school. One of the project’s key strategies is the formation of a Networked Improvement Community (NIC), an interdisciplinary community of researchers and practitioners with a common goal of improving math learning for girls.

While full of passion and drive, practitioners — whether they are classroom teachers, afterschool providers or teacher-trainers — lack the right partners or resources to turn great ideas into practice. The NIC has worked to foster and enable collaborations among researchers and practitioners that can address that issue. The most recent effort took place in early 2017, when NIC held a researcher–practitioner “matchmaking” meeting in New York City to connect the right researchers with classroom teachers and informal educators. The goal was for these researchers and educators to form partnerships to turn their innovative ideas on how to improve middle-school girls’ math identity and engagement into action.

In addition to creating a forum rich with opportunities to develop new partnerships, NIC awarded seven mini-grants at the event to jump-start some of the most innovative ideas. These ideas included projects specifically focused on addressing persistent barriers for girls of color, a project to improve the math identity and math skills of community educators who work directly with middle-school girls and a plan to develop a virtual learning opportunity to help middle-school math teachers use project-based learning as a strategy to improve girls’ math identity and achievement. These diverse projects have the potential to take clear steps toward broadening girls’ and women’s participation in STEM education and careers.

Learn more about this critical work