In Ethiopia, the “Red Card” has become a popular tool used by women to prevent sexual violence and encourage healthy decisions. When faced with sexual or aggressive advances, a woman will pull out her red card, which indicates that she is saying “no” to any potentially unwanted behavior. The Red Card helps equip women with an assertive and action-oriented response. 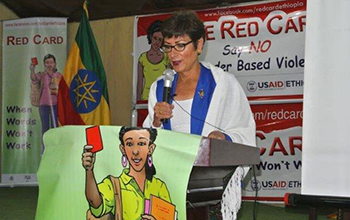 In collaboration with the U.S. Embassy of Ethiopia, FHI 360 organized a Red Card event as part of UN Women’s “16 Days of Activism Against Gender-Based Violence.” The event, When Words Won’t Work, was hosted by St. Mary’s University in Addis Ababa, Ethiopia.

The event was attended by high-level representatives, including U.S. Ambassador to Ethiopia Patricia Haslach; U.S. Agency for International Development (USAID) Deputy Mission Director Gary Linden; representatives from Ethiopia’s Ministry of Education and Ministry of Women, Children and Youth Affairs; and students from universities and high schools.

Through debates, drama, poems and contemporary dance, the students demonstrated how the Red Card can be used to raise awareness and prevent sexual violence. Participants also spoke about how the life skills they are learning empower young girls to say “no” to aggressive sexual advances, resist peer pressure and make good decisions. The students at the event showed confidence, assertiveness and clear self-expression, skills acquired through the USAID/Ethiopia In-School Youth (ISY) HIV Prevention program.

“The Red Card concept is similar to that in football, where a player who commits a violation is ‘carded’ by the referee and must leave the game,” Ambassador Haslach explained. “Young women, like yourselves, can use the Red Card program in a range of situations — from simple discussions with your own parents to encounters with aggressive men.”

Ambassador Haslach noted, “About five percent of secondary school students and about 15 percent of tertiary level students in Ethiopia have received the Red Card training. Almost half of the students who have received training on the Red Card have used it … to say “no” to sugar daddies, to abusive professors, to avoid violence, to refuse alcohol and other substances, and to insist on condom use.”

“It is great to see such innovative activities that are helping to empower women and reduce gender-based violence,” said Misti McDowell, FHI 360’s country director in Ethiopia. Under the ISY program, FHI 360 provides a package of services to girls, including the distribution of Red Cards and training on life skills.

In closing, Ambassador Haslach presented the students with certificates of recognition for organizing a successful event on this important issue. The students were encouraged to tell their friends about the Red Card and become “empowered to use it in a more assertive manner in the future.”

Second photo: Students hold their red cards at an event in support of the UN Women’s “16 Days of Activism Against Gender Violence.” FHI 360/Misti McDowell