In northern Nigeria, the rainy season brings a welcome respite from the relentless heat that is characteristic of the Sahel region for most of the year. But, rain also brings floods and contaminated water sources that increase the risk of water-related and fecal-oral diseases. 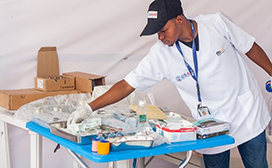 In late August 2017, reports began to circulate about a cholera outbreak in an internally displaced persons camp in Maiduguri, the capital of Borno State. Cholera, a diarrheal disease caused by ingesting contaminated food and water, can kill children and adults within hours if left untreated. Post-conflict areas where water, sanitation and hygiene facilities have been disrupted or destroyed are at high risk of cholera outbreaks.

Within two weeks, cholera had spread 80 kilometers down the road to Dikwa, which is one of FHI 360’s main locations for our Integrated Humanitarian Assistance to Northeast Nigeria project. Because of our existing work with the Dikwa General Hospital and a strong relationship with the Borno State Ministry of Health, FHI 360 was well positioned to lead a quick response. We were able to immediately identify, locate and transport essential resources.

This is a synopsis of the timeline:

During the first two weeks of the outbreak, the FHI 360 medical team saw 50 patients a day and admitted more than half of them for treatment. To date, our medical staff have consulted on 960 suspected cholera cases and witnessed 13 deaths. Because of this rapid response, Dikwa General Hospital has not had any new cholera cases since October 12.

While FHI 360’s medical staff worked to save the lives of infected patients, our field teams concentrated on containing the outbreak in communities outside the hospital. Containing a cholera outbreak involves pinpointing and addressing the source of contamination, promoting hygiene awareness and providing a safe water supply and access to sanitation and disinfection activities.

Bulabulin, a small town that hosts two large camps for internally displaced persons, was identified by FHI 360 and confirmed by the World Health Organization as ground zero, where the first cases and most of the subsequent cases originated. To begin investigating the outbreak, FHI 360 staff met with the town’s lawan, a high-level traditional leader. “Yes, I have heard about people being taken to the hospital with signs of cholera,” he said. He led our staff to an area near the houses where the first cholera patients lived, indicating a group of latrines that had no roofs or doors and were overflowing. Staff immediately recognized that these latrines could be the source of the outbreak.

Although FHI 360 staff had not worked in Bulabulin before the outbreak, they understood they had to expand their geographic focus to end the outbreak. “We knew we had to work together to ensure that all areas received attention,” said Simon Waba, FHI 360’s environmental health officer. “We knew concentrating our resources here [in Bulabulin] could help contain it.”

We engaged a drainage service to remove the waste from the latrines. We also deployed 64 water, sanitation and hygiene (WASH) promotion volunteers from the camps to conduct a range of complementary activities. These volunteers chlorinated water sources, cleaned and disinfected latrines and homes, and made house-to-house visits to promote hygiene.

“FHI 360’s streamlined response was recognized by the World Health Organization and the Borno State Ministry of Health as instrumental in curbing the cholera outbreak in Dikwa,” said Piet deVries, FHI 360’s Technical Director for Crisis Response. “And thanks to the support of the U.S. Agency for International Development’s Office of U.S. Foreign Disaster Assistance, our field teams continue to work with displaced persons in northeast Nigeria with cholera prevention, care and treatment and preparedness measures.”