Ideally, schools provide enriching educational environments where students develop the attitudes, habits and strengths they need to make good choices that keep them on track to succeed in school and life. However, for millions of youth around the world, schools are also a safe haven — an escape from poverty, conflict and fear. This is certainly true in El Salvador, the country that holds the undesirable title of murder capital of the world, with a homicide rate that is more than 20 times greater than the United States. Gang activity is largely to blame, resulting in widespread insecurity that affects much of Salvadoran society. 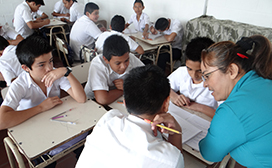 In 2015, approximately two-thirds of Salvadoran schools reported being affected by gangs, and more than one-quarter reported student dropouts due to gang violence. Adolescents are particularly vulnerable to gang influence, as the average age of entry into Salvadoran gangs is between 12 and 16. Many adults come to see youth as part of the problem, not as young people who need to be nurtured and developed.

FHI 360’s recent work in Salvadoran secondary schools has made important progress in providing social-emotional and academic supports to students. The lessons learned from this work can be adapted to other violent contexts to better prepare youth to succeed.

During the 2015 academic year, FHI 360 implemented the Developmental Assets and Student Success Pilot Program in the high-risk community of Sonsonate, El Salvador. Jim Hahn, Senior Program Officer, Global Education, explained, “The goals of the pilot were to transform mindsets and perceptions about the role of schools in supporting the healthy development of adolescents and to strengthen educator practices in eight lower secondary schools (grades 7-9) to keep students engaged in school and on track to graduate.” This pilot program was part of FHI 360’s Education for Children and Youth Program, funded by the U.S. Agency for International Development.

“The pilot increased the capacity of educators and Ministry of Education officials through two parallel interventions that were adapted from work we are doing in high poverty schools in the United States,” said Risa Sackman, Director of Schools Support and Development, United States Programs. These interventions included: (1) integrating a positive youth development approach and social-emotional supports into schools to build students’ strengths, and (2) introducing schools to the Indicators for Success, FHI 360’s research-based, early warning dropout prevention framework.

Initial results indicated that the pilot helped change educators’ perceptions of youth and helped schools successfully lay the groundwork for meaningful dropout prevention. Because it takes time to shift paradigms and practices, FHI 360 conducted a mixed-methods follow-up study with the pilot schools one year later to determine how well they had independently sustained the pilot interventions. While results varied, the majority of schools reported improved student-teacher dialogue, perceptions of youth and student behavior. In addition, the majority of schools continued activities designed to build student strengths and support their social-emotional development.

Schools also reported several common barriers to achieving positive results, including lack of time, competing priorities, lack of support from the Ministry of Education and minimal buy-in among some teachers.

Findings apply to other schools in similar contexts

These findings, coupled with a deeper analysis of those pilot schools that had successfully sustained interventions, helped FHI 360 define three recommended practices that we will use with other secondary schools that are in violent communities.

Identify champions to drive the work. The most successful pilot schools had a principal who championed the pilot’s core interventions and worked collaboratively to change staff mindsets. These principals shared the role of champion with teacher-leaders, who trained their peers and modeled effective positive youth development and dropout prevention strategies in the classroom.

In high-risk settings where youth are viewed as problems, a team of champions must alter this perception by educating others about adolescents’ developmental needs so students can receive the supports they need to thrive.

Establish dedicated time, space and resources for teachers to collaboratively develop positive mindsets and practices. Schools that most effectively sustained the interventions incorporated pilot activities in their annual school operating plans, ensuring that future resources and time would be dedicated to advancing the work. They also scheduled time for teachers to meet regularly in teams to continue pilot activities, including reviewing student data and designing interventions for students at risk of dropping out.

Involve parents and communities. In violent settings, it is critical for parents and community members to engage positively with youth in schools. The pilot schools that successfully continued supporting youth had educated parents about adolescents’ needs through workshops, and the schools invited community members to lead student activities. Through these interactions, student support systems were strengthened at home and within the community, and adults learned to recognize youths’ value to Salvadoran society.

While these recommendations are hallmarks of strong schools everywhere, they are particularly important for schools that are affected by violence. Strong leadership, dedicated time and resources for teacher collaboration, and family support can go far in helping schools become the safe, transformational spaces that young people need.