Pailin, Cambodia — Prominent entertainers from across Cambodia gathered at Pailin’s O’Tapuk Old Garage Station on May 8, 2015, for a special concert. The event supported the Royal Government’s efforts to fight malaria among migrant workers in the mountainous western province adjacent to the Thai border. The innovative partnership with Cambodian performers aimed to increase awareness of the disease and promote early malaria diagnosis and treatment, personal protection and the importance of using insecticide-treated bed nets. During the event, concertgoers had access to free testing and treatment provided by village malaria workers.

“More than three million people in our country live in close proximity to forested areas where the risk of malaria transmission is extremely high,” said Song Ngak, Deputy Country Director, FHI 360 in Cambodia. “We believe that this initiative is a great way to deliver important messages about malaria prevention, diagnosis and treatment to local community and mobile workers and to save thousands of lives.” 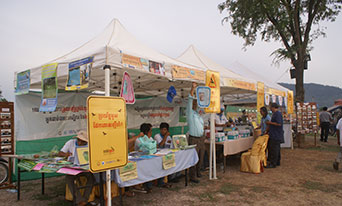 The concert was organized by FHI 360 and the Pailin Provincial Health Department with support from The Global Fund to Fight AIDS, Tuberculosis and Malaria through the United Nations Office of Project Services (UNOPS).

Despite being both treatable and preventable, malaria has a devastating impact on the livelihoods of millions of people in tropical and subtropical countries, including the 20,000 people who suffered from the disease in Cambodia in 2014. Migrant workers face a higher risk of acquiring the disease because they lack the semi-immunity of local populations. Migrant workers also may carry drug-resistant parasites back to their home provinces, increasing the risk of spreading drug-resistant malaria to other areas of the country.

Since 2007, FHI 360 has been implementing the Global Fund Grant Malaria Program in the province of Pailin. Reducing the spread of the disease in this part of the country is particularly important for malaria control and eradication efforts. The U.S.-based global human development organization is working to break the chain of malaria transmission at the community level and reduce mortality and morbidity.