Program in Ghana returns HIV patients back to care

Adherence to antiretroviral therapy (ART) is complex and can be influenced by culture, gender, family, economic status or interactions with the health care system. Any of these factors can result in poor or lost adherence with ART treatment.

Ghana’s Strengthening HIV/AIDS Response Partnership with Evidenced-Based Results (SHARPER) project, funded by the U.S. Agency for International Development (USAID) and implemented by FHI 360, strengthens the country’s standardized system of tracking and re-enrolling patients who have stopped their ART treatment. The USAID Ghana SHARPER project began a new activity to work with traditional health practitioners and spiritual camp leaders to encourage people living with HIV who have sought support from these spiritual leaders to re-enroll in care.

As part of the rollout, the USAID Ghana SHARPER project equips and trains community-based implementing partners on data-recording tools, such as those used to monitor and track patients. One of these partners is Pro-link. 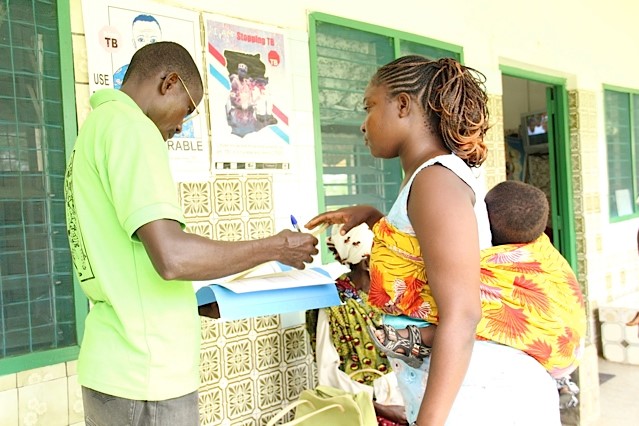 The Pro-link staff first met Abena* in 2012 when she tested positive for HIV while in a spiritual camp in the Ashanti region, where her family sent her after being sick for over a year. Pro-Link had developed a partnership with a network of local spiritual and traditional healers, which led to the initiation of HIV testing in the spiritual camps and a referral system to a local ART treatment center. Abena was referred to the Obuasi ART clinic, where she began treatment and learned about the Rising Hope Association, a Pro-link support group for people living with HIV.

In January 2013, Abena disappeared: She stopped attending the ART clinic and the support group meetings. A volunteer case manager, known as a “Model of Hope,” worked with a nurse at the ART clinic to find Abena. The Model of Hope visited Abena and learned that she had stopped her treatment because she was ashamed of having HIV. Abena wanted to help her family forget that she was HIV positive and believed her death would reduce the burden on her family.

From October 2013 to March 2014, the USAID Ghana SHARPER project, through the Model of Hope program, was able to track 971 of the 1,052 people living with HIV who were reported missing by participating ART clinics. Of those patients who were located, 9 percent had died and 16 percent had transferred to another clinic. Among those eligible for re-enrollment (495 patients), 78 percent (386 patients) were successfully re-enrolled on ART. This system of tracking patients who stop ART is now offered in eight of the ten regions in Ghana.

For her privacy, we have not used her real name.

Photo caption: A re-enrolled patient talks with a Model of Hope volunteer at a local ART clinic.