Globally, nearly 165 million children under the age of 5 are stunted. Stunting, or chronic malnutrition, can increase the risk of infection and mortality, result in developmental delays, diminish the ability to learn, lower school achievement and reduce lifelong productivity. 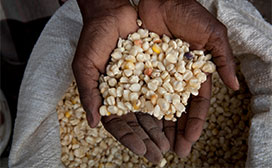 To support governments and national stakeholders in their nutrition advocacy efforts, the Food and Nutrition Technical Assistance III (FANTA) project, funded by the U.S. Agency for International Development (USAID), helps develop national nutrition advocacy plans that identify target audiences and tailor materials. For instance, advocacy efforts in Uganda have resulted in the government’s support of the Scaling Up Nutrition movement, the first-time inclusion of nutrition in Uganda’s five-year national development plan and the development of the Uganda Nutrition Action Plan 2011–2016, which made improving nutrition the responsibility of all government sectors. Additionally, a formal, multistakeholder, nutrition working group was established, with activities coordinated by the Office of the Prime Minister, and a nutritionist position was created within the local government structure.

To provide evidence-based estimates for nutrition advocacy, FANTA uses a tool called PROFILES. The tool consists of a set of computer-based models that calculate the consequences if malnutrition does not improve over a defined time period and the benefits of improved nutrition over the same time period, including lives saved, disabilities averted, human capital gains and economic productivity gains. These calculated benefits and consequences are the cornerstone of the nutrition advocacy process and can be used to identify, prioritize and advocate for evidence-based actions to reduce malnutrition.

As a result of a 2010 PROFILES report based on data projected for 2006–2015, FANTA started a coalition of nutrition champions with Uganda’s Ministry of Health to build political and donor interest in improving nutrition and to advocate for an effective legislative framework for the implementation of nutrition activities. FANTA and the coalition worked to develop and implement a nutrition advocacy strategy in Uganda to raise awareness of the problem of malnutrition, increase commitment to address malnutrition and harmonize nutrition advocacy efforts among stakeholders.

FANTA used the PROFILES tool in 2013 to calculate Ugandan estimates for 2013–2025, showing the benefits of improved nutrition and consequences if nutrition does not improve. This estimate concluded that if the nutritional status of the population did not improve, economic productivity losses for the country would be more than US$7 billion, and the number of infant and child deaths would be more than 500,000 over that period of time.

The actions based on the 2010 and 2013 PROFILES reports helped launch the Uganda Nutrition Action Plan that has positioned the country to tackle its malnutrition challenges. Since that launch, FANTA has supported other Ugandan government sectors, including gender, social development, agriculture and local government to integrate nutrition into their work. There has also been increased investment in nutrition by development partners, civil society organizations and the private sector.

In an ongoing effort to support nutrition advocacy, FANTA has updated the PROFILES tool to estimate human capital losses in reduced learning ability resulting from stunting and gains in improved learning ability if stunting is reduced. The effects of stunting on learning ability have significant negative consequences for many countries’ development and goals toward a highly skilled workforce. The technical brief from the FANTA project, The Effect of Chronic Malnutrition (Stunting) on Learning Ability, a Measure of Human Capital: A Model in PROFILES for Country-Level Advocacy, provides more information about the model, how estimates are calculated and how the estimates are used for nutrition advocacy.