If not treated properly, malaria in pregnant women can result in serious consequences, including miscarriages, under-term or underweight babies, stillbirths and maternal deaths. Fortunately, malaria during pregnancy can be prevented when women take three or more doses of the drug sulfadoxine pyrimethamine (SP) and sleep inside long-lasting insecticidal nets.

FHI 360 implements the Malaria Action Program for States (MAPS) project to increase the quality, access and uptake of malaria control interventions and reduce malaria-associated mortalities in Nigeria. One of the project’s key interventions is providing intermittent preventive treatment for malaria and long-lasting Insecticidal nets to pregnant women. 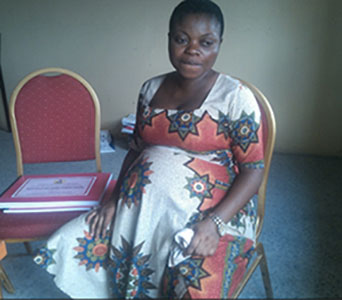 Queeneth Okoneyo, a 32-year-old health officer in charge of a health post in Bakassi, suffered a stillbirth in 2014 because of malaria. When a health officer who had received support from MAPS to collect and review health data from the area spoke with her about preventive treatment options, Queeneth realized it was possible to overcome the consequences of untreated malaria during pregnancy.

After finding that pregnant women in Queeneth’s health facility were not adequately protected against malaria, the officer advised Queeneth to give SP and long-lasting insecticidal nets to pregnant women receiving antenatal care in her health post. Queeneth realized that she, too, should take the same measures during her pregnancy.

Today, Queeneth is nearing the end of her pregnancy. She has been consistently taking the recommended doses of SP and sleeping inside an insecticidal net, and she has not had any signs or symptoms of malaria. “My husband and I are very happy that I will give birth soon, no more fear of malaria or stillbirth. Thank you FHI 360 and MAPS for providing SP to my facility.”

MAPS is funded by the U.S. President’s Malaria Initiative, through the U.S. Agency for International Development, to protect the population from malaria in nine states in Nigeria.

Photo caption: Queeneth Okoneyo, a community health extension worker and beneficiary of MAPS programming, looks forward to the safe delivery of her baby.