Lucas Joaquim is a 14-year-old boy from the Búzi District of Sofala Province who became an orphan in 2014, when he was 12. He went to live with his grandmother but soon after dropped out of the 4th grade and lived on the street. Lucas Joaquim was identified on the street by a YouthPower Action Activista (community health worker). With the consent of the young man’s grandmother and the involvement of the community leader and social action technician, the Activista encouraged Lucas Joaquim to participate in the YouthPower Action project. YouthPower Action is funded by the U.S. President’s Emergency Plan for AIDS Relief (PEPFAR) through the U.S. Agency for International Development (USAID) and is led by FHI 360 and a consortium of partners. 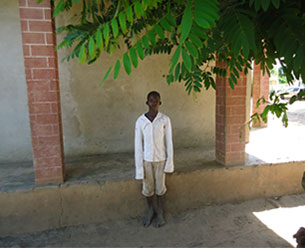 Once enrolled in the program, and with encouragement from the Activista, Lucas Joaquim agreed to live with his grandmother again. He participated in debate sessions in YouthPower Action youth clubs, and with time, he became an active participant in the clubs. The Activista and a local community-based organization invited him to be part of various community activities that helped promote a sense of purpose and belonging.

Lucas Joaquim joined the project’s economic strengthening activity and began saving money though the village savings and loans group. With this money, he was able to make small improvements to the home he shares with his grandmother.

Through friendships established within the youth clubs, Lucas Joaquim was able to develop positive peer influences that encouraged him to consider returning to school. Eventually, he asked the Activista to help him re-enroll and was integrated into a YouthPower Action study group that provides additional support to stay in school.

Lucas Joaquim’s grandmother was referred by the Activista to the National Institute for Social Action and is now the beneficiary of a basic monthly subsidy.

Lucas Joaquim dreams of having his own business and wants to be a teacher in the future.

Learn more about our work in positive youth development.