Fifteen students who participated in FHI 360’s Four Pillars PLUS project in Nigeria and successfully completed secondary school recently had a unique opportunity to develop new skills and innovative ideas. They attended the Digital Skills Summer Academy in Calabar, a collaboration between the After-School Center for Career Development — a local nongovernmental organization — and Four Pillars PLUS. 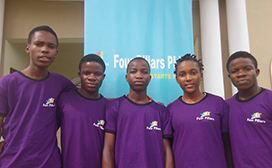 The academy offered a two-week training to improve young people’s learning, employment and engagement skills within the digital communications and technology industry. The curriculum covered web design and development, social media management, graphic design, Android app development, animation and video production, robotics and Google tools. It offered career counseling, mentoring, leadership and financial education, along with discussions and tours of leading technology companies. Through these activities, participants gained a window into the world of technology that they otherwise would not have had and explored nontraditional careers and ideas that would serve their communities.

The training culminated in a “pitch fest” in which trainees presented their ideas to a committee of judges. The theme of the pitch fest was “Teens in Technology: Finding Your Digital Signature.” The grand prize for the winners, who were announced during the academy’s graduation ceremony, was a sponsorship to attend and pitch their ideas at the Google Developers Festival (DevFest) for southern and eastern Nigeria in November 2017 in Aba. The winning team would also receive sponsorship for three to six months of additional training at the After-School Center for Career Development to build websites based on their winning ideas and improve their capacity to write blogs and use social media.

The Four Pillars PLUS participants won in several categories. In the team category, first prize went to Team Engage — Emmanuel Akpenkok, Samuel Akpenkok, Sylvanus Ezekiel, Abigail Sampson and Samuel Sampson — for their idea to develop a community website that links secondary school graduates to jobs, internships and training opportunities. The best-all-round prize in the personal category went to Abigail Sampson for a proposed community website that links midwives and pregnant women in Nigeria. Team Engage, including Abigail, won the grand prize and the trip to DevFest.

Abigail said that the training changed her attitude and motivated her to put more effort into learning. “At that training, I came to understand that my mindset had been limiting me from flying like an eagle to my success,” she said.