New grant to fight HIV and tuberculosis in Nigeria

FHI 360 has received a grant from the Global Fund to Fight AIDS, Tuberculosis and Malaria (Global Fund) to support the delivery of urgently needed, comprehensive HIV and AIDS services in Nigeria. The Investing for Impact against Tuberculosis and HIV project will help the country, which has the second highest burden of HIV in Africa, move closer to its goal of expanding prevention, treatment, care and support services to reduce HIV and its associated deaths and illness. 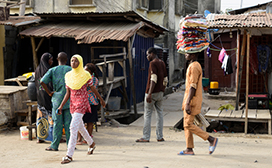 “FHI 360 is particularly excited to serve as principal recipient under the Global Fund grant to Nigeria,” said Robert Chiegil, Country Director for FHI 360 in Nigeria. “We will now have more resources to support the country’s worthwhile work toward achieving a society free of HIV and AIDS.”

This project will build on the results achieved under previous and current Global Fund grants. Our work to scale up HIV treatment efforts will focus on five of the six high-burden states (Akwa Ibom, Imo, Kaduna, Oyo and Rivers). Scaling up prevention of mother-to-child-transmission services will focus on 12 high-burden states (Akwa Ibom, Benue, Cross River, Imo, Kaduna, Kano, Lagos, Nasarawa, Oyo, Rivers, Sokoto and Taraba) plus the Federal Capital Territory. In addition, the project will provide tuberculosis (TB) screening for people with HIV, referrals for treatment for those found to have TB and isoniazid prophylactic therapy for those who do not. HIV testing will be integrated in TB clinics for more effective delivery of services.

FHI 360‘s work in Nigeria over the past 30 years has addressed a broad range of human development challenges. Since 2007, FHI 360 has received more than US$35 million from the Global Fund to implement multiple gender-sensitive, comprehensive HIV/AIDS interventions in Nigeria. These interventions have included all public-sector health facilities in the country. In collaboration with the government and international and local partners, we combat HIV and AIDS, tuberculosis and malaria; expand access to reproductive health care; strengthen health care delivery systems; increase food security; protect internally displaced persons; provide psychosocial support and related interventions for survivors of sexual and gender-based violence; and improve children’s education.