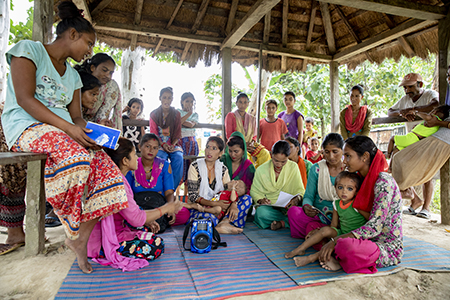 More than four billion people – over half of the world’s total population – use the internet. But in Nepal, civic information is being shared through a more traditional way: radio programs. And, women in particular are embracing them.

Sajha Boli and Saathi Sanga Manka Kura are two such programs. They are produced and managed by FHI 360’s Civil Society: Mutual Accountability Project (CS:MAP), which is funded by the U.S. Agency for International Development to foster a more accountable and resilient civil society in Nepal. These radio programs help to increase awareness of individual rights under Nepal’s new constitution and to empower citizens to participate more fully in decision-making that affects their lives.

To engage audiences, CS:MAP also created listening discussion and action groups (LDAGs) in the communities where it works. The LDAGs are usually groups of women ages 16-29 who meet on a regular basis to listen to the programs and discuss the issues raised. Each group has a facilitator who has been trained by the CS:MAP team. This training includes information about the role of the LDAGs and the role of facilitators in those groups, as well as basic facilitation and motivational skills.

The radio shows cover topics such as civil society, the role of media, budget and policy advocacy, gender equality and social inclusion, social accountability and the role of youth in development. Based on what a group has learned and discussed after an episode, a facilitator can elevate a community issue to the attention of the local government. In this way, the LDAGs can promote changes in community policy, individual behaviors and social norms to bring about positive transformations in their communities.

In 2018, for example, the Bageshwori LDAG worked to fix a local road, registered and renovated the community’s Durga Devi Temple and organized a candlelight vigil on September 21, the International Day of Peace. Other LDAGs have successfully ensured budget allocations for agricultural irrigation and for women and children’s programs.

Functioning as the eyes and ears of communities, the LDAGs are an example of civil society and media coming together in the public interest. To date, 102 LDAGs have been formed in 34 districts. CS:MAP plans to continue developing these informal groups into more formal public-private forums that can also oversee public resource utilization and service delivery.