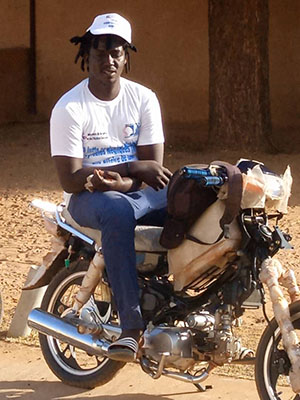 In Senegal, the region of Louga has organized MDA campaigns since 2009. With support from The END Fund and implementation by FHI 360, the region conducted a campaign to address two NTDs — schistosomiasis and lymphatic filariasis — in December 2019 in five health districts.

On the first day of the campaign, the FHI 360 team based in Louga went to a health center in the Linguère health district. They saw a young motorbike taxi driver, Galo Cissé, approach health center staff for information after seeing a poster showing NTD complications. Staff shared that the drugs they were distributing treat two NTDs. Cissé voluntarily took the medicine and returned to work.

Cissé told other motorbike taxi (Jakarta) drivers about the campaign. A few hours later, several Jakarta drivers arrived at the health center and lined up to take the medicine. Some drivers transported people to the distribution site for free.

In response, Dr. Papa Saliou Ndoye, the Linguère health district’s chief medical officer and the person overseeing the campaign there, gave the drivers campaign T-shirts and hats to increase the campaign’s visibility. Wearing these clothes, the drivers traveled around the city of Linguère, raising awareness about the campaign and encouraging community members to participate. They also convinced automobile taxi drivers to join their awareness-raising activities.

“The Linguère health district successfully reached its campaign objectives much earlier than in previous years, thanks to the awareness-raising efforts of the Jakarta motorbike drivers,” said Dr. Saliou Ndoye. “Everyone learned an important lesson: Young people can be influential partners for raising community awareness on MDA campaigns. Community awareness is invaluable in achieving the control and elimination of NTDs.”