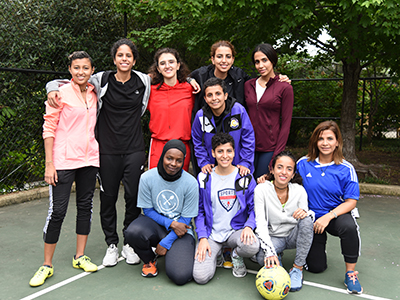 Twelve women soccer coaches from Saudi Arabia recently visited the United States as part of the Sports Visitor Program funded by the U.S. Department of State. During their 15-day exchange program, the women visited Kansas City, Missouri, and Washington, DC, to participate in on-the-field coaches training and explore key leadership skills through capacity-building activities. In addition, the group learned about the impact of U.S. Title IX legislation and gained insight into American society and culture through the lens of sports. While many of the Saudi coaches had ample experience in coaching soccer, few had received formal training. These twelve women are part of the first generation of trained women soccer coaches in Saudi Arabia.

We interviewed three participants about their experiences while they were in Washington, DC.

Rawh Abdullah Alarfaj, who is from Riyadh, met other women coaches from across Saudi Arabia for the first time. The opportunity to share thoughts and knowledge with these women sparked new ideas and a support system. The formal training Rawh received also changed her outlook on her career.

“Coming here and learning from people who study these things made me happy to know that I am on the right path. They opened my mind, and I feel confident,” she said. “We need to put our hands together, so we can achieve our goals and support females in Saudi Arabia.”

“We did not come just to play,” said Bayan H. Mohammed, a student at Jubail University College in Saudi Arabia’s Eastern Province. “We came to learn how to be a leader, how to communicate with others. We took two days of lectures not related to soccer that will help us in the long term with leadership.”

Bayan intends to use the training she received to create a formal soccer club at her university. “The first thing I will do is go to my college. Last year, we had a formal club, not for football but for all sports. So, we will open a team at the college, and everyone can apply for it.”

Although Lujain Mohamed Ali Kashgari began playing soccer when she was 8 years old, she never had formal training in coaching until now.

“The trainings were a combination of practical and theoretical, which was really effective,” said Lujain. “We had online courses and learned in the classroom. We focused on tactics and skills, which helped me to develop my soccer knowledge as a coach.”

Lujain and the other participants learned about team formation, including setting up a team before the game, and strategies that vary according to the number of players. “We learned when we should be strict and when we should be flexible, when we play defensive versus when we attack,” she said.

“Sports for women in general is a new concept in Saudi. In the past, we thought it was for men. Now, sports are finally being introduced to schools and in the community. I think it is a chance for us — for people interested in being coaches — to capitalize on our coaching skills and give back to the community.”

The U.S. Department of State’s Sports Visitor and Sports Envoy Program, implemented by FHI 360, use sports as a platform to enhance cross-cultural understanding and open new avenues of dialogue and collaboration between the United States and other countries. FHI 360 has a more-than-30-year history of developing international exchange programs for emerging leaders in a wide range of disciplines and sectors, such as health and medicine, communications, education, entrepreneurship, economics and nutrition.