The sexual and reproductive health (SRH) needs of young people — and the critical importance of meeting these needs — are well known. Still, young people globally face a multitude of barriers to accessing SRH information. 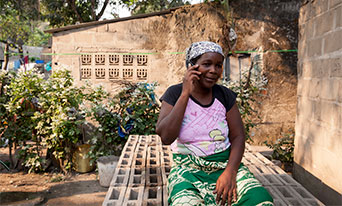 Mobile phones offer a promising solution for overcoming these barriers. Many of the world’s 3.6 billion mobile phone subscribers are young people. Mobile phones are relatively inexpensive, portable and accessible. As a communication channel, they offer privacy, confidentiality and convenience, which is critical in successfully conveying SRH information.

In 2008, FHI 360 developed Mobile for Reproductive Health (m4RH), a text message-based mobile phone communication system that provides users with information about the full range of contraceptive methods. The FHI 360 team conceptualized, deployed and tested m4RH as part of a pilot study aimed at determining the feasibility of providing family planning information via text message, the potential reach of this communication channel and its impact on family planning use in Kenya and Tanzania.

Results from the pilot demonstrated that m4RH is a promising platform for reaching young people with SRH information. During the pilot period in Tanzania, about 60 percent of m4RH users were 29 years in age or younger. Data indicated that young m4RH users in Kenya liked the simple language and confidentiality of receiving health information via mobile phones. In both countries, users reported increased contraceptive knowledge and use after using the mobile phone program. A few of the respondents said:

“I started using the everyday pill. After m4RH I visited the clinic and got pills, now I have no fear of getting pregnant.” (Female, Kenya, 21)

“I like the advice provided on family planning and the way clients are handled — there is no bad language used.” (Female, Kenya, 20)

The encouraging results from the pilot led FHI 360 to adapt the m4RH program for youth in Rwanda, Tanzania and Uganda. In collaboration with key stakeholders, including young people themselves, the m4RH team developed additional messaging on puberty, pregnancy, HIV, sexually transmitted infections and gender. In addition to the menu-based messages, FHI 360 developed supportive messages that demonstrated the benefits of healthy youth SRH-related behaviors through weekly, locally relevant, role-model stories. Following are a few examples of the m4RH messages designed specifically for youth.

In a healthy relationship, sex should never be pressured, forced or traded. Young people who decide to have sex should use condoms as well as other pregnancy prevention methods to avoid pregnancy and HIV/ STI infection.

Puberty is when girls and boys bodies change. They grow bigger and taller, their genitals mature and hair starts growing in new places. This usually happens between ages 8–13 in girls and 10–15 in boys. Sometimes it happens earlier or later, and lasts about 2–5 years.

“m4RH is filling an important gap in meeting young people’s sexual and reproductive health needs,” said Kate Plourde, Senior Technical Officer, Research Utilization, FHI 360. “The m4RH team is excited about the potential of this program to reach millions of young people globally and continues to seek opportunities to implement m4RH for youth in other countries.”