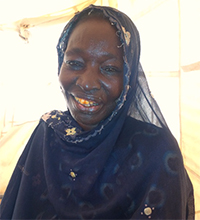 Fati Mohammed is a 45-year-old widow and mother of three who used to live in Dikwa in Borno State, Nigeria. Her husband died of complications from AIDS, and in 2014, she tested positive for HIV. Fati was tested at Dikwa General Hospital, which at that time provided comprehensive HIV services led by FHI 360 through the Strengthening Integrated Delivery of HIV/AIDS Services (SIDHAS) project. The SIDHAS project, which is funded by the U.S. Agency for International Development, works in Nigeria to integrate HIV/AIDS care by delivering high-quality, comprehensive prevention and treatment services.

After her diagnosis, Fati enrolled in the hospital’s antiretroviral treatment program. She was committed to adhering to treatment, and her health began to improve. Not long after Fati began treatment, insurgents attacked Dikwa. Town activities shut down, including hospital services, and residents were forced to leave for their safety. Fati and her family made it to Maiduguri, the capital of Borno State, which is more than 56 miles away. Her family is part of the stream of 2.1 million people who have been displaced by the ongoing insurgency in northeastern Nigeria and have had their access to health care services threatened or cut off.

Fati and her children took shelter in the Sanda Kyarimi camp for internally displaced persons in Maiduguri, but she struggled to cope with the new environment. Because she could not access antiretroviral medicines, her health began to deteriorate and she became desperate to regain her strength and health so she could care for her family.

To help families like Fati’s, the SIDHAS team conducted a rapid assessment, in April 2015, of HIV/AIDS services for internally displaced persons in the 15 camps that were officially recognized by the Borno State government. The following October, the project established two mobile clinics to deliver antiretroviral therapy to residents of these camps. These clinics help ensure that people who are displaced by violence can still obtain HIV/AIDS services, such as testing and antiretroviral medicines.

When Fati learned that these services were now available in her camp, she rejoiced and immediately went to the mobile clinic to reenroll in an antiretroviral therapy regimen. After six months, she received confirmation that her health had improved greatly since restarting the regimen.

The SIDHAS project continues to support families like Fati’s in camps in Nigeria. A year after the mobile clinics began, SIDHAS teams have tested more than 8,800 people living in the camps for HIV, and 302 people who tested positive have been enrolled in an antiretroviral therapy program.