Moldova’s media environment has been characterized by a downtrend in press freedom and transparency, with political and business interests influencing media content and restricting access to information. While Moldova’s 2014 Association Agreement with the European Union (EU) promised to accelerate the country’s media development, much remains to be done in ensuring media transparency and independence in accordance with EU standards.

Under the premise of reducing disruptions, the Moldovan Parliament restricted media access to its proceedings in 2014. Journalists could not access the lawmakers’ debate hall, and cameramen and reporters had to monitor plenary sessions from television screens in a small room, where they received only partial versions of the proceedings. The visual and sound quality of the recordings provided by Parliament were often poor and did not meet professional television station standards. 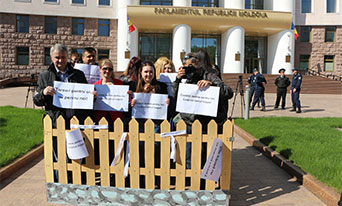 However, in April 2016, cameramen, reporters and photojournalists regained full and direct access to Parliament’s plenary sessions and were able to select, independently, which to broadcast. This move to a more transparent Parliament was the result of a media campaign by the Independent Journalism Center (IJC), led under the banner “We Want Access to Parliament.” IJC is supported by the Moldova Partnerships for Sustainable Civil Society, a project funded through the U.S. Agency for International Development and implemented by FHI 360, which works to improve Moldovan civil society and the capacity of media organizations to represent citizens’ interests and influence policymaking.

For more than two years, IJC worked to promote journalists’ right to attend plenary sessions by organizing flash mobs, public debates, press clubs and petitions. One of the distinctive elements of the campaign was the installation of a “press corral” in front of the Parliament building to symbolize restriction of access to information. “It has been a broad campaign with a range of activities meant to increase solidarity among journalists and to pressure politicians to ensure proper working conditions for journalists so that they can provide accurate information to citizens,” said IJC’s Executive Director, Nadine Gogu.

IJC will continue working with Parliament to ensure that journalists have access to the press room whenever they need it and are able to move in and out of the Parliament’s debate hall to provide timely, live updates to the public.

IJC tackled another, less visible, obstacle for media development in Moldova — the lack of information on media outlet ownership — by organizing a campaign to amend the Broadcasting Code. Parliament subsequently approved the amendments to the code, including IJC’s recommendations regarding the transparency of media, requiring all Moldova media outlets to publish information on their owners as of November 2015. Knowing who owns media outlets will enable Moldovans to recognize misinformation and will facilitate civil society advocacy for media independence and pluralism of voices.

IJC has also been pushing to amend the Law on Access to Information to reduce the amount of time by which public officials are required to provide requested information to the public from 15 to 10 days and to spell out concrete disciplinary actions against public officials who refuse to provide information. The amendments were approved in the Parliament’s first reading on July 28, 2016.

To raise awareness on media reforms and to ensure citizens’ right to information, IJC will continue to engage journalists and citizens and to monitor the government’s commitments to improve media freedom in Moldova in line with European standards.

Photo caption: Moldovan reporters participate in a campaign to protest the restriction of rights to attend Parliament’s plenary sessions.