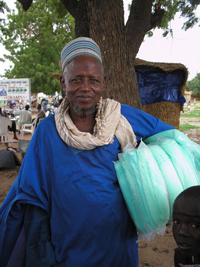 MAPS is a five-year, $79.9 million project funded by the U.S. Agency for International Development (USAID). Through the MAPS project, FHI 360 — in partnership with Health Partners International, Grid Consulting and the Malaria Consortium — aims to scale up usage and coverage of lifesaving malaria interventions in seven states in Nigeria.

Religious leaders play a key role in the fight against malaria, as they are some of the most trusted members of a community. Recognizing the authority of religious leaders, and in an effort to combat stigma against malaria testing, the emirs of Bakura and Kaura Namoda participated in a rapid diagnostic test (RDT) during the training. RDTs are designed to quickly assess if someone has the malaria parasite.

This training equipped religious leaders with the tools and knowledge necessary for them to return to their communities to support malaria control efforts. The Emir of Kaura Namoda, His Royal Highness Alhaji Muhammad Ahmad Asha, said, "[I]will coordinate and mobilize all the members of my community to see that malaria is controlled and prevented." Other emirs said they would promote long-lasting insecticide net use and treatment in medical facilities.

The training took place in March and had wide support from many state officials. Not only did four prominent emirs attend, but the local government's Ministry of Health, Religious Affairs and Chieftaincy Affairs extended invitations to participants.

MAPS is also working in Zamfara to increase the capacity of Nigerian community structures' response to malaria control by working with nine ward development committees. A ward development committee is the advisory unit to the local government. MAPS is working with these groups to increase their ability to promote malaria prevention through supporting distribution of long-lasting insecticide nets, among other methods. The program has been successful thus far, with local clinics reporting an increase in women seeking antenatal care as a result of the increased prevention efforts in the community.