Patricia Matuku cannot hide her joy when she shows visitors her thriving pearl millet crop in her village of Kisaala in eastern Kenya. A 44-year-old mother of four, she is excited at the prospect of a robust grain harvest this year. This is the first time that Patricia has planted millet, a highly nutritious, drought-resistant crop that does well in semi-arid regions as an alternative to maize, which has not grown well in the area for several years due to insufficient rain. 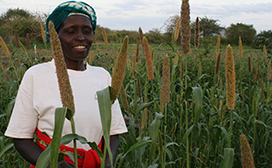 Even though a few local farmers grow millet, Patricia did not know about its value until she attended training classes in cooking and nutrition. Both events were organized by the Maka Mothers Support Group, an initiative of the Nutrition and Health Program Plus (NHPplus) project implemented by FHI 360 and funded by the U.S. President’s Emergency Plan for AIDS Relief (PEPFAR) and the U.S. Agency for International Development (USAID).

With support from NHPplus, government nutrition officer Penina Lwaya works with several Mothers Support Groups to combine nutrition and agriculture interventions as an effective approach to tackling malnutrition and stunting. With her counterparts at the Ministry of Agriculture, she advises households on which foods to grow and engages teachers, religious leaders and other leaders to promote good nutrition practices. “We all try to break down the information in such a way that the women can understand,” Penina says, acknowledging low literacy in the area.

Penina coordinated with the Maka Mothers Support Group to teach Patricia and others how to prepare balanced, healthy meals using different local foods. Demonstrations prepared nutritious and tasty meals using the grains millet and amaranth, green grams (also known as mung beans) and other beans, and other ingredients.

An agricultural extension officer taught the women that although the area is dry, the soil is very fertile. The group learned that they could take advantage of the short rainy season to grow quick-maturing crops such as millet.

When the rain came in late March, Patricia wasted no time planting millet seed and watched as her new crop thrived. She says she will convince her family to plant more millet, alongside cowpeas and green grams that also do well in the area. When asked if she would sell the millet at the market, she said, “No way, I will not sell any of the crop but use it to prepare meals for my family. This millet is a very nutritious crop.”

Patricia is also applying the skills she learned from the NHPplus trainings in her kitchen garden, where she has planted peppers, kale, tomatoes and onions.

NHPplus project staff also teach about the need for a diversified diet, including products from small livestock. One member of the local Mothers Support Group said her husband used to sell most of the eggs from their chickens, but he now keeps more for the family. Another woman praised her husband for allocating more money for food and following her meal plans.

These household changes are indicators of the steps women are taking to adopt new, healthy and sustainable growing and dietary habits. By the end of 2017, NHPplus plans to train 2,200 frontline community volunteers to empower more than 31,000 women with agriculture and nutrition information and skills.