FHI 360 congratulates its partner, Shanghai Dahua Pharmaceutical Co., Ltd. (Dahua), on achieving prequalification from the World Health Organization (WHO) of its two-rod contraceptive implant, Levoplant, which is also referred to as Sino-implant (II). By attaining WHO prequalification, Levoplant/Sino-implant (II) is now recognized as meeting international quality standards.

“WHO prequalification is an important milestone that will open the door for Dahua to reach additional markets globally with a contraceptive implant that is proven to be high-quality, highly effective and affordable,” said Dr. Markus Steiner, senior epidemiologist at FHI 360 and project director of the Sino-implant (II) Initiative. “Dahua’s presence has already had a substantial impact on public health by introducing competition into the contraceptive market and helping reduce the price of contraceptive implants overall. Prequalification will enable Dahua to bring the product to more women worldwide.” 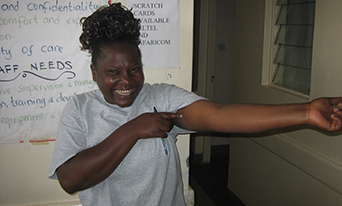 FHI 360 and Dahua have worked together since 2007 to increase access to high-quality, affordable contraceptive implants in low-resource settings. Under the Sino-implant (II) Initiative, funded by the Bill & Melinda Gates Foundation, FHI 360 has provided technical assistance with the WHO prequalification application process, including by leading clinical trials in China and the Dominican Republic to supplement existing clinical evidence. FHI 360 has also conducted independent quality testing of the product, negotiated public-sector price-ceiling agreements with distributors and provided assistance with national registrations. In addition, we have collaborated on post-marketing surveillance studies in four countries, with funding from the U.S. Agency for International Development (USAID).

Sino-implant (II) has been registered in more than 20 countries worldwide, and over 1 million units have been procured in countries included in the initiative. To support its application for WHO prequalification, Dahua augmented the Sino-implant (II) product specifications and test methods and changed the levonorgestrel supplier; the product is now sold under the global brand Levoplant. Levoplant has been WHO-prequalified for a three-year duration of use, with the pivotal trial ongoing into the fourth year; registrations at the national level are currently being updated. In November 2016, the United Nations Population Fund approved Levoplant/Sino-implant (II) for purchase by its country programs through the WHO Expert Review Panel process. WHO prequalification will now allow additional donors to purchase the product for country programs.

Several contraceptive implants are currently on the global market, including Jadelle,® another two-rod implant containing levonorgestrel, and Nexplanon,® a single-rod implant containing etonogestrel. “The presence of Dahua, a third quality-assured supplier of contraceptive implants, will help to ensure a healthy market for implants over the long term by sustaining low prices; guaranteeing that there is sufficient supply to meet demand; and providing countries, procurement groups and women with additional choice,” said Dr. Laneta Dorflinger, director of Contraceptive Technology Innovation at FHI 360.

Dahua has worked for many years with a consortium of partners, including service delivery groups, governments and distributors such as DKT, Marie Stopes International and Pharm Access Africa Limited. This month, Dahua will join stakeholders at the Family Planning Summit in London to discuss how Levoplant can contribute to the FP2020 goal of reaching an additional 120 million women in low-resource settings with high-quality, affordable contraceptive services by 2020.

Resources for countries that are interested in introducing Levoplant can be found in the K4Health Implants Toolkit and on Dahau’s website. For more information about FHI 360’s work on Levoplant/Sino-implant (II), please email us.