Leading the way on recycling: A Ghanaian girl's inspired effort to clean up her community

While walking to high school, Zimran Quansah found herself staring at the waste-lined streets and waterways of Gbawe, her hometown in Ghana’s Greater Accra Region. There is no central recycling program in Ghana, and members of the Gbawe community (population about 75,000) could be found picking up plastic waste and water sachets and selling them as their livelihoods.

When she had the opportunity to participate in the Pan-Africa Youth Leadership Program (PAYLP), an exchange program administered by FHI 360, Quansah identified improper waste management, poor levels of sanitation and the increase in litter on her school route as the main problem faced by the people in her community. She decided to take action by developing a project called Ridding Our Schools and Communities of Filth. 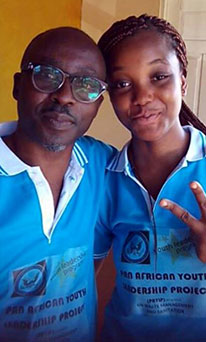 PAYLP, funded by the U.S. Department of State’s Bureau of Educational and Cultural Affairs, brings mixed-country delegations of 70 high school students and adult mentors to the United States annually to explore themes such as entrepreneurship, the environment and public health. The program promotes high-quality leadership, civic responsibility and civic engagement among future leaders, providing them with the tools, knowledge and building blocks to return home and motivate change in their communities.

Using the tools she acquired through PAYLP, Zimran returned to Ghana and met with school representatives to discuss their role in establishing a sustainable recycling program in Gbawe.

At first, her idea for a recycling program was not well received by school representatives because of the extra labor and resources such a program might require. But, she continued to meet with them to discuss the positive impact the program could have on the school and community. Her persistence paid off: four schools in the Gbawe community agreed to participate.

Zimran kicked off her program with a recycling competition. She distributed recycling bins to each school, and the schools competed to see who could collect the most plastic waste and water sachets. The result? Five 50-pound recycling bags were filled nearly to the top. Zimran said these bins “made them understand how important the project [is] and the impact they could make to keep their schools and communities clean.”

Zimran recently started college. She intends to monitor the progress of the participating schools to ensure the program is sustainable. She also hopes to implement more recycling programs in the Greater Accra Region.

“PAYLP helped build my confidence to take the bold step leading to [the project’s] initiation,” Zimran said. “The program gave me a wide scope of what it entails to handle a project.”