Southern Africa is a region of vast human development potential and diverse resources. Through the Kellogg Southern Africa Leadership (KSAL) program, funded by the W.K. Kellogg Foundation, FHI 360 is building on the momentum for economic and social change in this area of the world by investing in young people. More than 250 individuals have participated in the KSAL program, which operates in seven countries: Botswana, Lesotho, Malawi, Mozambique, South Africa, Swaziland and Zimbabwe. 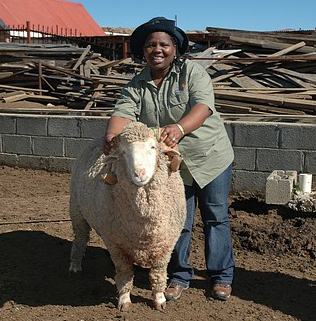 The goal of the KSAL program is to prepare a new generation of thought leaders for Southern Africa by providing educational financial assistance, leadership development and community service opportunities to selected recipients known as fellows. The KSAL program promotes leadership that is values based, ethical and committed to people-centered development. One fellow, Puleng Matebesi, saw an unmet need in her country, Lesotho, and decided to pursue animal genetics.

“I heard that it was a difficult field, and no one wanted to do it, and there was no information about animal breeding in Lesotho, so I decided to do it,” she said. “And there are not a lot of women in the field, so I had to be the pioneer.”

Still, with a husband and two small children at home, studying full time and traveling to far-flung farms was not easy. Sometimes she was out of touch with her family for days. The support Matebesi received from FHI 360 experts helped her to succeed. That support ranged from coordinating travel, to brainstorming solutions to problems, and even checking in with her family to make sure they were doing well. “KSAL gave me the opportunity to do whatever I wanted to do,” she noted.

Another fellow, Hastings Saka, is currently an undergraduate at the Catholic University of Malawi in Blantyre. Saka has always had a passion for giving back and has already shown his leadership potential in his community. Saka formed the Chiuzira Unity Youth Organization (CUYO) in his hometown before he became a KSAL fellow. Saka spends part of his holidays each year working with CUYO, which runs awareness campaigns on various public health issues, including HIV and AIDS, and addresses child rights and youth economic issues.

The group has blossomed under Saka’s leadership. “We used to rent, but [Saka] led in writing a proposal that applied for seed funding. As the youth, we provided the labor, and the chief provided the land. It was a real community project — led by the youth,” said a current member of CUYO.

The KSAL program is building the capacity of communities and countries by helping create a cadre of young people who are equipped with the knowledge and education to attain their goals.