Scientists have discovered a unique biological control technique that could offer an environmentally safe, sustainable and cost-effective measure to control the dengue virus. Dengue fever — contracted from the bite of an infected Aedes aegypti mosquito — can be found in most tropical areas. An estimated 2.5 billion people live in places where dengue is endemic. Developed as part of a large, multi-organizational research program known as Eliminate Dengue, this new approach could prevent the spread of dengue fever without relying on community behavioral change or insecticide products.

The process initially involved transferring life-shortening Wolbachia bacteria from a fruit fly to a mosquito, which causes the mosquito to die prematurely before it can transmit the dengue virus to humans. Subsequent trials have shown that the Wolbachia can actually block the replication of the dengue virus inside the mosquito, rendering it unable to transmit the disease. This unexpected finding has changed the focus of the program and, along with it, how the scientific world is tackling mosquito control efforts. The next step is to field test the approach — by releasing batches of Wolbachia-containing mosquitoes into communities where the dengue virus is endemic — to examine this technique's effectiveness at preventing dengue fever.

As one of the Eliminate Dengue partners, FHI 360’s Vietnam office is facilitating the project's activities within Vietnam. In collaboration with in-country partners, FHI 360 identified the pilot release site of Tri Nguyen Island, Khanh Hoa province, to field test the Wolbachia-containing mosquitoes. Before releasing the mosquitoes into the community, FHI 360 worked to ensure that the community gave their informed consent and that local concerns were incorporated into the research program. 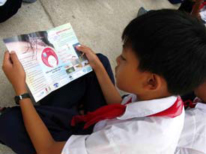 One preliminary course of action involved translating complex scientific language into simpler terms. At first, the researchers tried to explain the process of infecting mosquitos with Wolbachia. But they found that highly technical language was not properly understood by the communities, so they changed their approach.

Once the proper messages were formulated, researchers disseminated them through a variety of communication vehicles, including community meetings, school programs, local radio programs and individual home visits. Local communities now understand the innovation and have responded very favorably to the release of Wolbachia-containing mosquitoes into their communities. Their involvement in the process is key to the project's success and will grow in importance as larger scale field trials are rolled out.

The Ministry of Health’s Ethical and Technical Review Board officially approved the release of Wolbachia mosquitoes on Tri Nguyen Island in October 2012. FHI 360 is currently undertaking the preparation phase of the project, so release of mosquitos can start in March 2013.

The Eliminate Dengue program, based in Australia, has begun field testing in communities in the northern city of Cairns, Australia, where dengue is also rampant. Results are very encouraging. These findings will have a direct impact on release strategies in Vietnam and elsewhere.