In Nigeria, the Akwa Ibom AIDS Indicator Survey (AKAIS) broke new ground by generating more accurate data than previously available. The new data will be used to improve Akwa Ibom State’s response to HIV, while the survey serves as a model for a similar countrywide HIV survey. 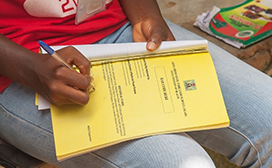 The population-based, cross-sectional survey, which was conducted between April and June of 2017, yielded improved estimates of HIV prevalence and incidence among a broad range of age groups, including those younger than age 15. The results, recently released by high-level state personnel at a stakeholder event, allowed for better descriptions of the demographic, socioeconomic and behavioral risk factors associated with HIV in this state and provided estimates of the unmet need for HIV interventions. The study was the first completed state-level survey in Nigeria to measure HIV incidence and prevalence simultaneously.

The survey, funded by the U.S. President’s Emergency Plan for AIDS Relief (PEPFAR) through the U.S. Agency for International Development (USAID), was a joint effort of the Akwa Ibom government and the Strengthening Integrated Delivery of HIV/AIDS Services (SIDHAS) project, which is implemented by FHI 360 and its consortium partners. SIDHAS staff facilitated pre-survey trainings, strategic planning meetings, stakeholder meetings, community sensitization and engagement, and facilitator trainings. They also helped to ensure that extensive measures were in place to safeguard the quality and effectiveness of all survey operations, including data quality assurance.

The state government provided an enabling environment for the survey and helped to mobilize citizens to actively participate in it. State officials also supported survey implementation processes, including ethics approval of the survey protocol, recruitment of survey field personnel and supervision of field work.

Robert Chiegil, FHI 360’s former country director in Nigeria, noted that the survey required high levels of support and collaboration from thousands of residents and the state government. He said, “A survey where more than 4,000 households and 15,000 individuals were sampled is no small task. The results of this survey will give Akwa Ibom State the accurate and precise data it needs to guide the scale-up of prevention and treatment services and to determine unmet needs.”

Akwa Ibom is among the first states to administer the AIDS Indicator Survey in Nigeria and the first to disseminate its findings. The government will use the lessons learned from conducting the survey to guide planning for HIV control programs and conduct a national, population-based, HIV indicator and impact assessment.