Through the Sustainable Management of the HIV/AIDS Response and Transition to Technical Assistance (SMART TA) project, FHI 360 developed and used innovative models that addressed gaps in HIV prevention, care and treatment in Vietnam and improved the efficiency of these services. Project staff implemented SMART TA in partnership with the Vietnam Administration for AIDS Control, provincial AIDS centers and departments of health, and district-level health facilities in 11 provinces. The project was funded by the U.S. Agency for International Development (USAID). 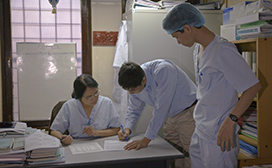 Over the life of this five-year project, more than 280,000 people received HIV testing services, and 15,000 adults and children were newly enrolled in antiretroviral treatment. In its final year alone, SMART TA supported efforts by the Government of Vietnam to treat more than 23,000 people living with HIV and to provide methadone treatment for 19,000 people who inject drugs, which is more than 20 percent of all HIV and methadone maintenance treatment patients in Vietnam.

As the government assumed greater leadership of the HIV program, SMART TA helped integrate HIV services into the curative health system, where facilities can be reimbursed through social health insurance. HIV patients in Dien Bien and Nghe An were the first in the country to receive social health insurance reimbursement for HIV services because of the project’s close collaboration with and support to local partners.

SMART TA also led or contributed to the development of national policy and curricula for every aspect of the HIV response, from HIV testing and treatment to tuberculosis and methadone treatment, changing how HIV services are delivered in Vietnam. A set of tools developed by SMART TA, Transition and Technical Monitoring Tools, are now routinely used to assess and strengthen HIV services. Methadone treatment service models developed under SMART TA are now the predominant mode for delivering and sustaining high-quality, efficient methadone treatment across the country. The project’s work to integrate facility health information systems for HIV and health insurance is considered a best practice and is being replicated within and outside Vietnam.

FHI 360 leveraged the project’s success to secure follow-on funding for the five-year USAID Sustainable HIV Response from Technical Assistance (SHIFT) project, which was awarded in 2016. Through the USAID SHIFT project, we will continue to support the government’s efforts in priority provinces to achieve the 90-90-90 targets set forth by the Joint United Nations Programme on HIV/AIDS (UNAIDS). We will also guide initiatives to transition the HIV response to full government responsibility in additional provinces supported by international donors.