HIV prevention by the numbers: The Saath-Saath project in Nepal 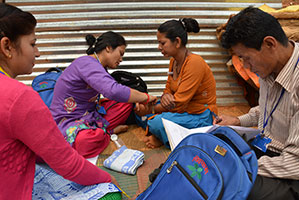 From 2011 through 2016, FHI 360 worked with the Government of Nepal to reduce the transmission and impact of HIV and improve reproductive health among key populations, including female sex workers and their clients, transgender sex workers, migrant workers and their spouses, and people living with HIV. The Saath-Saath project operated in 33 of Nepal’s 75 districts, mobilized 48 formal partners and collaborated to implement extremely focused, well-aligned interventions. The project helped hundreds of thousands of people through its outreach activities and clinical services.

Noteworthy achievements of the project include: