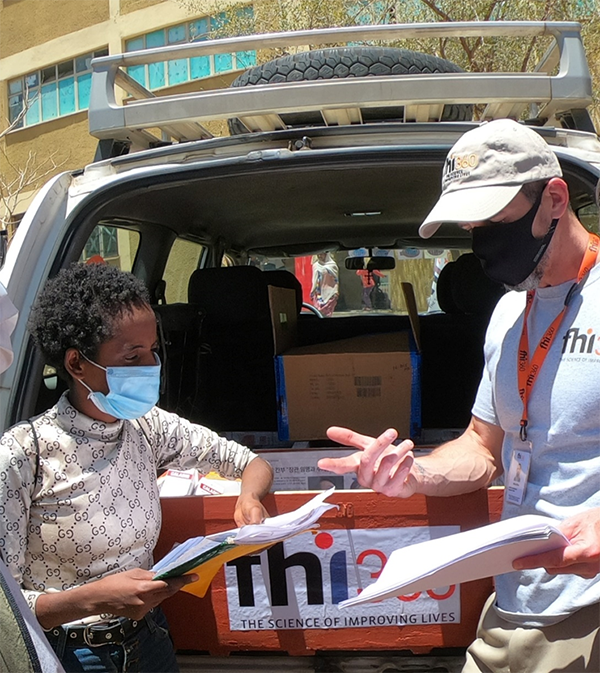 With continued fighting between the Ethiopian Defense Force and the Tigray People’s Liberation Front, the humanitarian situation in Ethiopia continues to deteriorate, with nearly 5.2 million people in need of some level of assistance. With the growing need, FHI 360 sent in its crisis response team to set up mobile medical units and provide safe drinking water for internally displaced people across 12 locations.

Security concerns and the dynamic context present constraints for humanitarian workers to access conflict areas, accounting for people in the wider Tigray region to continue to suffer without essential medications and treatment. As access slowly opens up, FHI 360 is identifying health clinicians among the internally displaced communities to help deliver services.

Maereg,* a nurse with the Ethiopian Regional Bureau of Health, had been based at a primary care hospital in a town called Hawzen in the Tigray region. Because of intense fighting in the area, much of the population fled. Her mother died during the conflict, but Maereg was able to get to safety in Mekelle with her son and two sisters. With 3,000 other displaced people from her community, they lived in a warehouse before they were relocated to a school where FHI 360 provides water.

Maereg had been treating patients in her community on her own with what little she had when she approached FHI 360 and asked if she could obtain supplies. This simple request launched FHI 360’s creation of a program to support displaced clinicians and health care workers with basic medicines and supplies to provide around-the-clock care and work with the FHI 360 team to refer people to more advanced care when necessary. The program not only ensures that emergency care is there when needed, but also gives displaced health providers the ability to continue to care for their own communities.

“The program has been well received by the health providers, our funder and the government, not to mention all the people who are benefiting directly from the care. The FHI 360 team in Tigray has been able to expand to four more sites housing internally displaced people and will continue to support more health providers where we can,” said Michael O’Brien, FHI 360’s Associate Technical Director for Crisis Response.

FHI 360’s work in Tigray is funded by the U.S. Agency for International Development's Bureau of Humanitarian Affairs through the Integrated Services for Humanitarian Implementation – Northern Ethiopia project.