When Ashesi University College student Gucci Boateng became an HIV/AIDS peer educator, he asked his girlfriend to get tested for HIV. Her initial reaction was common among their peers. 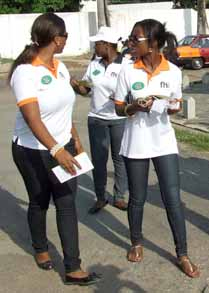 "She felt like I wanted to abandon her or that I was suspicious of her," said Boateng. But according to Boateng, after they discussed the importance of testing, she realized he made the request not out of suspicion, but because he cares for her.
Boateng's girlfriend is one of about 7,600 Ghanaian students who have been tested for HIV through a campus-based mobile testing and counseling project, run by the Ghana AIDS Commission with assistance from FHI 360. The project covers 22 postsecondary institutions, including teaching colleges, universities and vocational schools. The mobile units offer access to free and confidential counseling and testing, and referral for treatment services.

The initiative, which began in 2010, is supported by the Global Fund to Fight AIDS, Tuberculosis and Malaria and targets 15- to 24-year-olds. HIV prevalence among both in-school and out-of-school youth is estimated to be 2.1 percent in Ghana, higher than the national rate of 1.9 percent, according to 2009 statistics from the National AIDS Control Programme (NACP).

While HIV counseling and testing is available nationwide at accredited health centers, "most people are too shy to access these centers," said coordinator Joyce Adubea Osae. "We take counseling and testing to the campus, instead of waiting for young people to come to us." Even on campus, many students are reluctant to get tested due to fears that knowing their HIV status may jeopardize their studies and their futures.

While some schools have been reluctant to permit condom education and demonstration on school premises, intensive advocacy with school authorities has resolved misconceptions and removed fears. Before on-campus counseling and testing begins, project staff assess each school's HIV prevention resources and work closely with school administrators. Some campuses have even transformed their health organizations into HIV prevention clubs.

The more than 400 peer educators nationwide have generated such demand that the mobile testing and counseling sites — large tents erected on campuses during school festivals or at residence halls — frequently have long lines. In return for their work, peer educators receive cell phone credits and school supplies.

Before her training, 19-year-old Ashesi peer educator Michelle Kyei and her peers had very little knowledge of HIV and its prevention. Kyei remembered the first time she wore her "We have a message for you" shirt to school and urged other students to take the HIV test.

She said, "It took a lot of convincing; I told them how quick the test was and how it was necessary to know your status."

Since then, Kyei has used the skills she learned during the three-day peer educator training to persuade other young people to take the free test. As of September 2011, 139 of Ashesi's more than 450 students had been tested for HIV.

The growing number of students wearing wristbands that read "I know my status" is a sign that progress is being made on reducing stigma associated with HIV and AIDS on postsecondary campuses. As one peer educator stated, "It is important for everyone to know their status so that, if need be, people can start treatment earlier."