The Government of Ghana has eliminated trachoma as a public health problem, according to the World Health Organization (WHO). The country is now the first in West Africa to achieve validation of trachoma elimination. 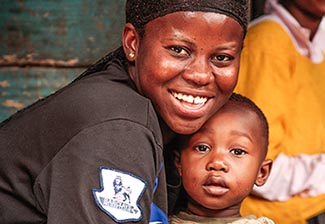 Trachoma is the foremost infectious cause of blindness worldwide. It is a bacterial eye infection that affects the eyes and eyelids, causing scarring in the eyelids and resulting in the eyelashes turning inward toward the eye (trichiasis). The continuous brushing and scratching by the distorted eyelashes can result in corneal ulcers and end in blindness if there is not an early intervention.

Through the END in Africa project, funded by the U.S. Agency for International Development (USAID), FHI 360 has worked with the Ghana Health Service Neglected Tropical Diseases (NTD) program for eight years to eliminate and control trachoma and other NTDs. Including Ghana, FHI 360 is working in six West African countries to support all phases of NTD program implementation, including  mapping disease distribution, treating at-risk populations, monitoring and evaluating treatment impact and documenting successes. During 2010 to 2018, the END in Africa project supported the global distribution of more than 464 million NTD program treatments for trachoma and other diseases.

“Ghana’s huge achievement in eliminating trachoma is clear evidence of the impact of USAID investments to improve lives and promote health in countless communities, with support from committed partners like FHI 360,” said Dr. Tim Mastro, Chief Science Officer at FHI 360. “We now have increased momentum in the global fight against NTDs.”

Bolivar Pou, Project Director for END in Africa, added, “Congratulations to Ghana! Diseases like trachoma affect citizens across entire countries, and eliminating them is no small feat. Ghana’s success shows how much a small, dedicated team of national and international partners — including the Ghana Health Service and FHI 360 — can accomplish with strong commitment and a whole lot of persistence.”

Since 2010, FHI 360 and USAID have provided technical and financial assistance for trachoma post-treatment surveillance and trachoma prevalidation surveys in 37 of Ghana’s districts, as well as assisted in the development of a trachoma elimination dossier. This dossier outlines disease prevalence, treatments, care for people with trichiasis and access to clean water and sanitation — all of which were criteria for securing WHO validation of elimination of trachoma as a public health problem.