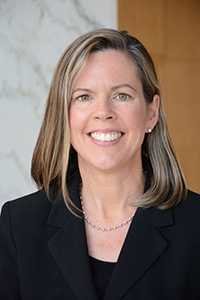 FHI 360 is pleased to announce that General Counsel M. Katherine Stroker, JD, has been elected to the board of directors of the Washington chapter of the Society for International Development for a three-year term.

“SID-Washington brings together diverse groups that aim to build a more just world and better future for people everywhere,” says Stroker. “I am honored to join SID’s board and look forward to working with SID’s members to address the complicated challenges we face today.”

Stroker has more than 20 years of private-sector and public-sector experience, including roles at the U.S. Agency for International Development (USAID), the U.S. Department of State and the Peace Corps. At the Peace Corps, Stroker served as Deputy Chief Executive Officer, with responsibility for global operations and programs, policy, health services, volunteer recruitment, security and the agency’s budget. Stroker had previously served as the Peace Corps’ Acting General Counsel. Stroker practiced law in the private sector before joining the government and served as a Foreign Lecturer at the University of Paris. She joined FHI 360 in 2019.