About eight months a year, workers from impoverished communities on the northeastern coast of Honduras strap on dive masks, fins and battered air tanks and plunge into the Caribbean on a perilous quest for "red gold" — the spiny lobster. 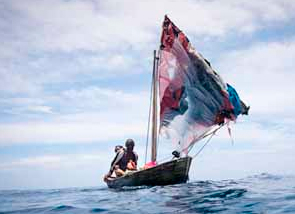 The lobster — a staple at seafood restaurants in the United States and Europe — has been a financial lifeline for these communities. But high demand over the years has devastated the lobster population.

Each year, divers equipped with almost no safety gear, such as pressure gauges, venture into deeper waters in search of the lobsters. They sometimes do not know they are running out of air until breathing becomes difficult. If they rush to the surface, they risk paralysis or death from decompression sickness. Since 2003, hundreds have died, with thousands more injured.

How the lobsters are caught puts the creatures at risk as well. Divers and trappers sometimes catch lobsters that are pregnant or undersized. Divers also can damage the lobsters' habitat with the hooks they use to snag the lobsters. Because of the danger to both the divers and lobsters, Honduras intends to ban lobster diving, effective in 2013.

"Addressing the issue of responsible management of the lobster fishery should involve all stakeholders in the (supply) chain in an integrated manner." — Gabriela Pineda de Arias, head of the Honduran Directorate of Fisheries and Aquaculture

The situation in Honduras mirrors a global problem. Fish are a key source of food and jobs around the world. But while demand for fish is growing, the fish supply is declining. To help protect fish and jobs, FHI 360's Global FISH Alliance (G-FISH) promotes sustainable fisheries and fishing practices around the world. Currently working in Cambodia, Honduras and Mozambique, G-FISH brings together the different sectors directly or indirectly affected by fishing and helps them collaborate on solutions. Partners include the Environmental Defense Fund, the University of Rhode Island Coastal Resources Center and a range of local businesses.

G-FISH's first targeted effort is in Honduras. In 2009, G-FISH launched an initiative that connects people from all sectors involved with the spiny lobster — such as divers, trappers, lobster boat captains, processors, exporters and buyers — with environmental groups and officials from the national and local governments to help sustain the spiny lobster and the individuals and communities that depend on it.

G-FISH helps the lobster industry adopt sustainable fishing practices, such as returning pregnant lobsters to the sea and removing traps when lobster season ends. It also helped establish a commission in the Honduran legislature that advocates for fisheries. And in 2010 and 2011, G-FISH hosted symposia to foster discussions about the spiny lobster and raise awareness of lobster-fishing regulations and fishery management.

G-FISH connects divers in Honduras to organizations that provide grants and training for new lines of work after the ban on lobster diving takes effect, such as tourism. G-FISH is also helping to promote lionfish as an alternative to catching lobster. Lionfish have invaded the crustacean's habitat and have been feeding on young lobsters. At the 2011 symposium, initiative partners showed participants how to cook lionfish, and one local processor began exploring the idea.

In Honduras, G-FISH helped one local environmental organization, the Roatan Marine Park, create a campaign to educate local restaurant owners and their customers about which seafood to avoid. G-FISH also organized a trip to La Moskitia, home of many of the divers, to educate journalists about the economic and social impact of lobster diving. The effort generated newspaper articles and television news stories.

In conjunction with the lobster initiative, G-FISH launched a social marketing campaign called "Know Your Source" to raise awareness about the impact of lobster diving. G-FISH produced a YouTube video and a poster to highlight the message that being a responsible buyer and consumer includes knowing the source of seafood. The campaign's website, knowyoursource.org, has averaged 500 unique visits a month from 53 countries since the campaign's launch in 2010.

G-FISH's work in Honduras has caught the attention of Central America's fishery authority, which hopes to see the lobster initiative expand to the entire region and increase its impact. G-FISH also continues to share knowledge about sustainable fishing practices with industry, community and academic experts around the world.

G-FISH uses a methodology called the System-wide Collaborative Action for Livelihoods and the Environment (SCALE) approach. SCALE was developed by FHI 360 experts about 15 years ago as a systems approach to social change. The approach brings together key players with a stake in an issue to develop a consensus on the issue and its solution. These players then commit to share resources and implement action plans that they create together, which in turn helps ensure local ownership of both the issue and the solution.