FHI 360's contributions to the fight against malaria in Nigeria

Malaria is a serious public health problem in Nigeria, but the last decade saw increased support for fighting this illness from the government and its partners. FHI 360, through the Malaria Action Program for States (MAPS) project, has greatly contributed to malaria prevention efforts in the country, curbing malaria infections with lifesaving interventions. The project was funded by the U.S. Agency for International Development (USAID) through the U.S. President’s Malaria Initiative. 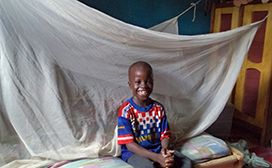 The MAPS project, which reached approximately 40 million people in nine of Nigeria’s 37 states, has been a key activity of USAID’s malaria response since 2010. In December 2016, FHI 360 marked the completion of the project with a technical meeting that involved the USAID mission staff in Nigeria, the Government of Nigeria (through the National Malaria Elimination Program) and other project partners. The meeting focused on a subset of activities in core areas, including:

The primary activities of the MAPS project included increasing ownership and use of proven malaria interventions (such as long-lasting, insecticide-treated nets); supporting and strengthening parasite-based diagnosis, case management and services to treat malaria in pregnancy; increasing awareness and knowledge of malaria prevention and treatment services; strengthening the management capacity of states and local government areas to implement malaria control; and improving the collection and use of malaria data at all levels: health facilities, local government areas, states and federal agencies. These activities have significantly bolstered the country’s efforts to increase and improve services that diagnose and reduce the prevalence of malaria in project-supported states.

FHI 360 looks forward to continuing to work with our partners in Nigeria to strengthen the response to this deadly illness.

Photo caption: All smiles in front of a bed net donated by the Malaria Action Program for States (MAPS) project to students in Oyo state.