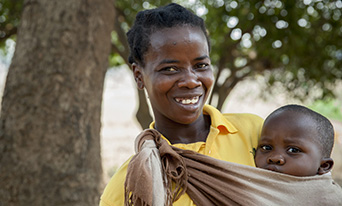 New research published in The Lancet Global Health shows that self-injected contraceptives may truly be a game changer when it comes to increasing the continued use of contraception among women in low-resource settings, where the availability of high-quality contraceptives — and health clinics where they can be administered — is limited.

At the request of the Ministry of Health in Malawi and the U.S. Agency for International Development (USAID)/Malawi, FHI 360 examined the effectiveness and safety of home and self-injection of subcutaneous depot medroxyprogesterone acetate (DMPA-SC), also known as Sayana® Press, an injectable contraceptive that provides three months of safe, effective pregnancy prevention. Sayana Press is a lower-dose formula and subcutaneous presentation of the popular injectable contraceptive, Depo-Provera®.

FHI 360 conducted a one-year, randomized controlled trial with more than 700 women who opted into the study after seeking family planning services at six Ministry of Health clinics or from community health workers. Women were randomized to receive either DMPA-SC from providers, including community health workers, or training on how to self-inject DMPA-SC. Self-injectors were sent home with three doses, whereas women in the provider-administered group were asked to return to the provider for subsequent injections. The trial found that self-administration led to a more than 50 percent increase in continuous DMPA-SC pregnancy protection through 12 months compared with provider-administered injection. There were similar rates of pregnancies, adverse events and overall side effects observed in the self-administered and provider-administered groups.

“These positive findings demonstrate that DMPA-SC is a highly effective solution that can address the stubborn problem of early discontinuation,” said Dr. Holly Burke, scientist at FHI 360 and the study’s principal investigator. “They also provide evidence that community-based health workers can safely train women to self-inject DMPA-SC. We can say with more certainty that the community-based provision of injectables for self-injection in low-resource settings is safe and feasible: It should be made widely available as another contraceptive option for women.”

The study, funded by USAID and the Children’s Investment Fund Foundation, was conducted under the Advancing Partners & Communities project in partnership with the University of Malawi College of Medicine. The results will be used to inform decision-making on the procurement and distribution of DMPA-SC through the Malawi national health system.

“These results have implications for other areas of global health, especially as new drug delivery technologies allow for self-administration,” said Dr. Burke. “Self-injection of other medications may improve other health conditions affecting disadvantaged populations around the world. Adherence to medication is a global health problem that affects the entire medical field.”