DURHAM, NC — Over the last six months, FHI 360 has received notice that it will implement four of the U.S. Agency for International Development’s (USAID) cutting-edge initiatives in civil society strengthening, to include the US$202 million Strengthening Civil Society Globally (SCS Global) Leader with Associates (LWA) award. 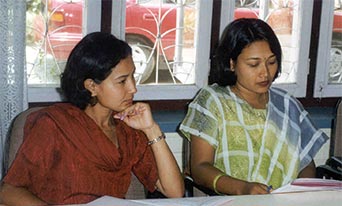 Other recent awards include a new project, Civil Society: Mutual Accountability Project (CS:MAP), to strengthen the capacity of Nepal’s civil society and media to advance public interests and two projects in Mali – one to increase citizen engagement nationwide and another to develop the capacity of a local nongovernmental organization working to mitigate conflict in the northern part of the country.

“FHI 360 is honored to have received these recent awards,” said Michael Kott, Director of the Civil Society and Peacebuilding Department at FHI 360. “Over the last year, FHI 360 staff have been at the helm of self-supported initiatives to assess and strengthen the most effective civil society networks throughout the world, and we have led industry-wide gatherings on technology and civil society development. Our recent work has also advanced the practice of integrated development, and we have been fortunate to play a role in Myanmar’s transition to democracy and in civil society support around countering violent extremism in the Middle East and North Africa. We are thankful that USAID has recognized our work and has continued to support our efforts to foster more accountable governments and committed citizenries worldwide.”

Maria Presley, Senior Technical Officer at FHI 360 who supported the design of the new awards said, “The award of SCS Global, Nepal, and the two programs in Mali represent only a portion of the expertise that is housed within FHI 360’s Civil Society and Peacebuilding Department. We benefit from a roster of experts who speak ten different languages, have experience in more than 50 countries and are committed to working with local stakeholders to advance more sustainable development.”

FHI 360 staff have played a leading role in civil society strengthening programs for more than two decades, including the implementation of some of USAID’s very first citizen engagement programs in the former Soviet Union. The organization led USAID’s first activities to counter violent extremism in the Sahel and was the sole recipient of USAID’s Capable Partners (CAP) LWA, a mechanism that built the capacity of more than 10,000 citizen leaders and civil society organizations in 54 countries and was a predecessor to the USAID Forward initiative. Recent awards represent the next wave of the organization’s efforts to advance civil society strengthening worldwide.