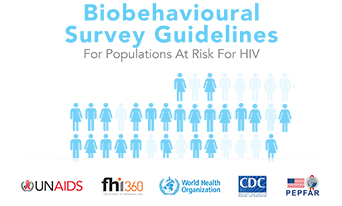 The Global HIV Strategic Information Working Group, of which FHI 360 is a member, has published an important update of a document that provides vital information and guidance on how researchers can employ biologic (including laboratory testing) and behavioral surveys to measure and address HIV, the world’s most pressing public health challenge. Biobehavioral surveys are used to provide specific, population-level estimates of HIV and its related risk factors, along with estimates for the coverage of prevention and treatment services for populations at increased risk for HIV. Biobehavioural Survey Guidelines For Populations At Risk For HIV covers all aspects of biobehavioral surveys, from conceptualization to the use of data, and can be adapted to various countries, populations and contexts. It offers practical tools to facilitate the implementation of the guidelines, including checklists, questionnaires and a budget planner template.

The first iteration of the guidelines, focusing mainly on behavioral surveys, was published in 2000 by FHI 360 (then FHI) as part of the IMPACT project supported by the U.S. Agency for International Development (USAID) and the U.K. Department for International Development. This update is more expansive and focuses on the key populations — sex workers, men who have sex with men, transgender persons and people who inject drugs — who are at high risk for HIV but are often challenging to identify and measure. The update fills the need for tools to survey these populations.

The update also incorporates newer survey methodologies and information on biomarker testing. Importantly, it provides standards for the conduct of biobehavioral surveys across countries and a common set of indicators for data measurement, which permits uniformity in data collection. Standard indicators are imperative to tracking progress in the provision of testing and treatment and identifying gaps in access to services.

“One of the biggest challenges to preventing the spread of HIV is understanding where the epidemic is moving and where we need to devote more resources to fill unmet needs,” said Dr. Timothy Mastro, FHI 360’s Chief Science Officer and a contributor to the updated guidelines. “Good data are key to this decision-making. The updated guidelines are the best blueprint we have for collecting — and standardizing — data on HIV through biobehavioral surveys. FHI 360 is pleased to have been part of the scientific leadership that led to the completion of this update. We hope that its use will lead to a more effective and efficient response to HIV.”

In addition to FHI 360, the Global HIV Strategic Information Working Group includes a wide range of members, notably the Joint United Nations Programme on HIV/AIDS, the World Health Organization, the U.S. Centers for Disease Control and Prevention, USAID and the U.S. President's Emergency Plan for AIDS Relief (PEPFAR). The update is the result of five years of collaboration among the members of this working group, with funding provided by PEPFAR and the Bill & Melinda Gates Foundation.