FHI 360 combats Ebola in the Democratic Republic of the Congo

FHI 360 is now engaged in a response to the latest Ebola virus disease outbreak in the Democratic Republic of the Congo. 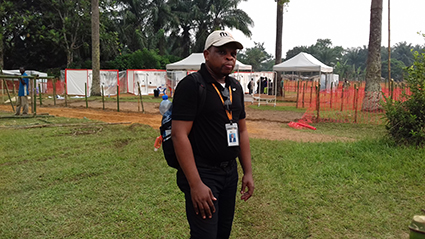 One month into the latest outbreak in this country, there are 66 reported Ebola virus or hemorrhagic fever cases, including 38 confirmed cases and 28 deaths. The outbreak lies in the province of Equateur on the banks of the heavily trafficked Congo River, which leads directly to Kinshasa, the country’s capital and a major urban area with a population of about 11 million.

Effective point-of-entry screening of people traveling from affected regions is critical to containing an Ebola outbreak. Immediately after the outbreak was reported, FHI 360, working in close collaboration with the World Health Organization and other partners, deployed its infectious disease expert to provide technical assistance and training on point-of-entry surveillance to health border control officials and epidemiologists.

This work is vital to ensuring that the outbreak is contained and does not spread to Congo’s urban cities or neighboring countries. FHI 360 continues to support the Ebola response through contact tracing, early disease detection at points of entry, health worker training, site visits and capacity building among health workers and epidemiologists.

Photo caption: Dr. John Otshudiema of FHI 360 works on the Ebola response in the Democratic Republic of the Congo, June 2018.